When a guy with flowers in his hand jumps in a cab at four in the morning and says he's in a big rush to get to 25th Street and 1st Avenue, it can mean only one thing - female trouble.

Here's what happened: Tyrone does event planning and had organized a party for clients earlier in the evening. His fiance, Amanda, had thought she would be able to go to this party herself but it turned out she could not get in. She told Tyrone it was okay, no big deal, and went home while he stayed and worked the event. But later in the night, when the party was finished, they spoke on the phone and Tyrone detected that Amanda was in fact a bit upset about it. Result: flowers, particularly sunflowers which Amanda is fond of, and an emergency taxi ride to 25th and 1st. 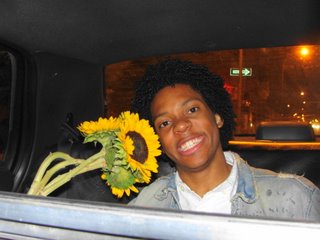 Some of the best advice I ever heard about maintaining a relationship is to never go to sleep over an upset. Tyrone must have heard this advice, too, or just have great instincts, because he didn't treat this as a trivial matter. Getting Amanda un-upset was top priority. Now if she does the same for him, these two are going to have a very hamonious marriage.

An interesting thing about Tyrone, by the way, is that he speaks Italian fluently. He told me both his parents are half Italian and half black and he grew up speaking both English and Italian. He had some amusing stories about being among Italians, overhearing their Italian conversations, and then shocking them by revealing (in Italian) that this black kid understood everything they were saying! It reminded me of a fare I had a couple of years ago in which an Asian girl was speaking in Russian to her friend. It turned out she was from one of the former Soviet republics. It wasn't a language I would ever have expected to be coming out of her body.

So, Tyrone... how about a comment about how it turned out with Amanda that night? My millions of readers want to know!
Posted by Eugene Salomon at 10:57 PM 10 comments: Links to this post

Email ThisBlogThis!Share to TwitterShare to FacebookShare to Pinterest
Labels: emergencies

Each year on the night of September 11th the "ghosts" of the Twin Towers appear at Ground Zero as twin columns of laser lights that shine upward into the sky as far as the eye can see. It's a starkly beautiful remembrance of the buildings themselves and of the events that occurred there. Driving my taxi around the city that night, I took some shots of the lights from various vantage points and wound up stopping at Ground Zero at 3 AM to pay my respects. 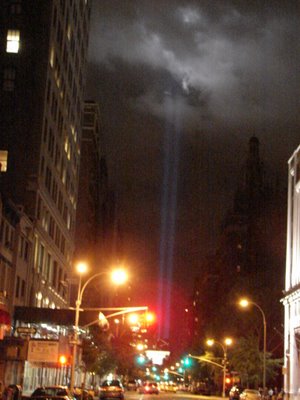 From 5th Avenue as it enters Greenwich Village. 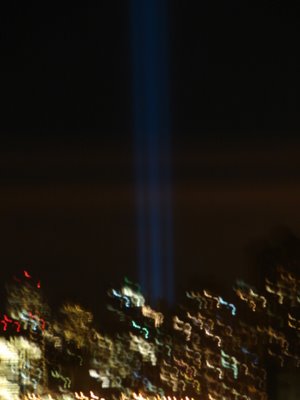 An artsy kind of shot taken from the 59th Street Bridge. 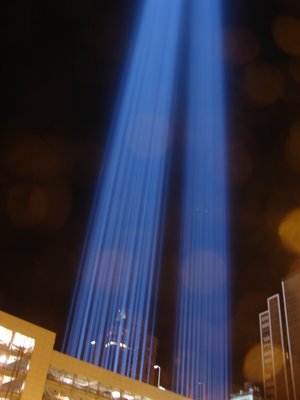 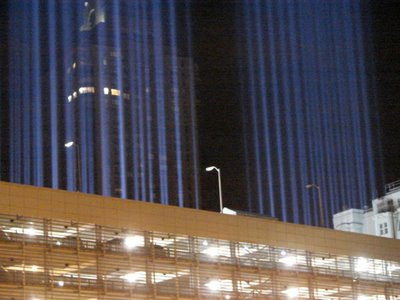 The source of the lights turned out to be from the roof of a parking lot above the entrance to the Brooklyn-Battery Tunnel. 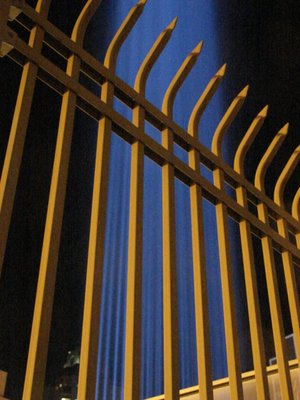 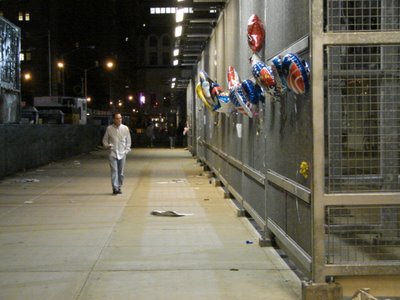 Ground Zero is four blocks in length. The gargantuan pit can be viewed from behind a fence on the Church Street side. 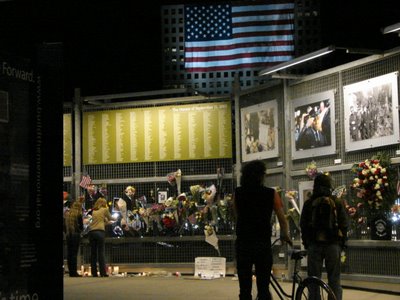 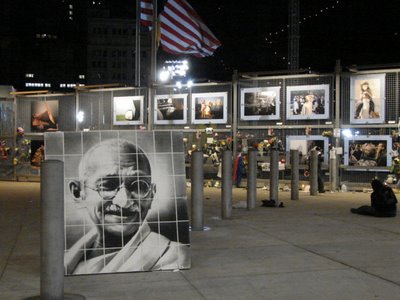 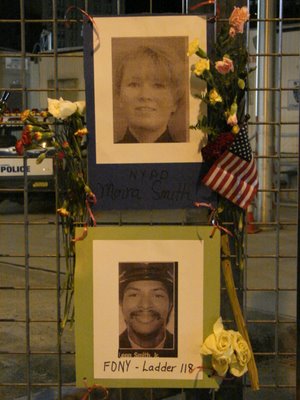 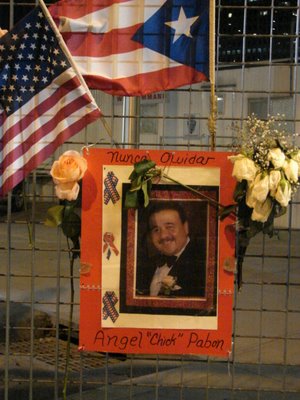 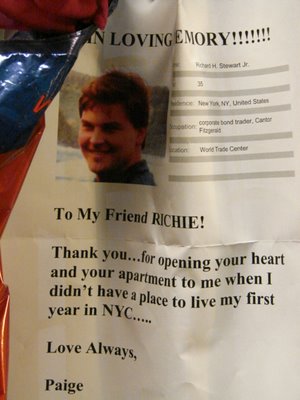 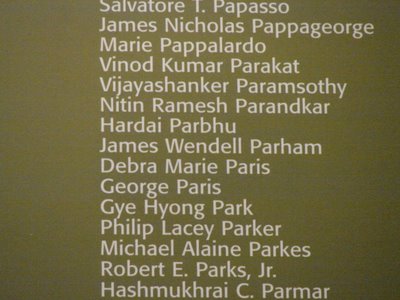 The one person I knew who perished that day was Debbie Paris, the wife of my old friend Jim Marrash. I remember Debbie as a caring and lovely person. 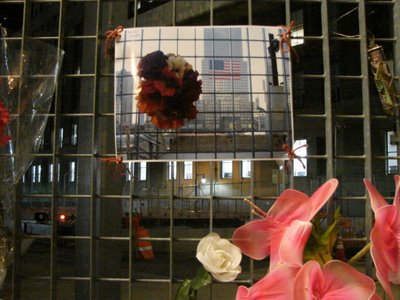 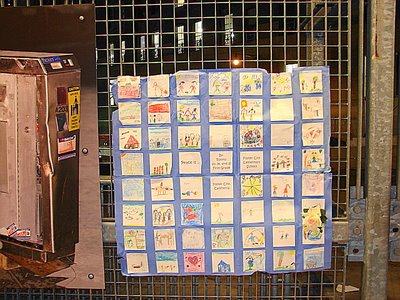 One of the items displayed on the fence surrounding Ground Zero was this collection of pictures and messages from children in an elementary school in California. It contained this bit of advice... 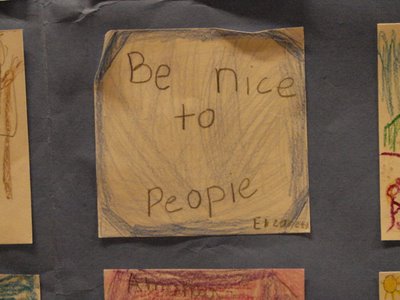 Posted by Eugene Salomon at 3:06 AM 3 comments: Links to this post

I am often asked by passengers where I was on 9/11. I tell them I have two answers to that question and they are both truthful: a) I was at the World Trade Center on Sept. 11th, and b) I was home asleep on Sept. 11th.

I drove a night shift on Sept. 10th, 200l. The shift started at 5 PM and ended at 5 AM. At 2 AM during that shift, then Sept. 11th, I picked a woman up in Greenwich Village and drove her to the PATH train entrance of the World Trade Center on Vesey Street. The PATH train is an all-night subway that runs to New Jersey. It was just a routine ride. I drove for another three hours that night and went home. I live alone and didn't know about the attacks until my daughter came over and informed me of it at around 3 PM. I was actually getting ready to go to work, having no knowledge of what the rest of the world already knew.

And yet, oddly enough, I can say that technically I was there that day. The idea that eight hours after dropping off that fare at the WTC the towers would cease to exist still strikes me today as unfathomable. Anyone who ever stood at the foot of one of those buildings and looked up would fully understand that. It just couldn't have happened.

The weeks that followed 9/11 were, of course, a special time in New York City. I drove a cab relentlessly during those weeks, barely taking a day off, feeling a sense of obligation to carry on. It was a time more than any other time when people needed to share what they were going through. I would just ask "How are you doing?" when anyone got in my taxi. What came back more often than not was a flood of communication and emotion.

One of the aspects of the tragedy that still amazes me is how many people it involved directly. Momentous events do not always involve many people. The JFK assassination comes to mind. But the events of 9/11 entangled everyone who lived in New York City. Thus, everyone has a story. I heard many of those stories in the months that followed. Some of them have stayed with me.

There was a young man who told me how he was climbing up the stairs from his subway station just beneath the WTC and, having no idea that a plane had just crashed into one of the towers, was confronted with a scene of chaos instead of the usual sights on the street that he was so used to seeing as he reached street level. He likened it to opening a familiar door and suddenly finding yourself in Dante's Inferno.

There was a woman from a church group who told me they were caring for several children from a daycare center near the WTC whose parents had never come to take them home.

There was a young woman who worked on the 10th floor of the first building to be hit who told me that the initial attempt of the people on her floor to evacuate had been thwarted because there was a fire in the part of the lobby where the staircase was located. Burning jet fuel had dropped down the elevator shafts and was burning in the lobby. Everyone had to go back up the stairs to their offices. Not knowing what to do, she crouched under her desk and prayed, basically paralyzed with fear. Eventually a second attempt to leave the building was successful, as by that time the firemen had arrived and had put out the fire in the lobby. But as she filed out of the building with the others, they were ordered to walk forward and not look back. Bodies of people who were jumping from the top floors were landing in the plaza and the police were trying to spare the people who were leaving the horror of seeing this.

There was a fireman who told me how he had barely escaped being killed by the debris of the collapsing first tower by taking refuge under a fire truck. He commented that many people have said that the events seemed like scenes from a Godzilla movie but he thought it was more like scenes from SAVING PRIVATE RYAN.

And there was a ride with two other firemen who told me, as we passed a firehouse on Amsterdam Avenue at Sixty-Sixth Street, that every fireman from that station had died.

Most of the stories I heard were told to me within a year of 9/11. It took about that much time for most people to have said all they had to say to whomever needed to hear it and for individual lives to be moving forward again. But the eeriest story I have yet heard was actually told to me just a few months ago.

I picked up a 30ish man on 57th Street and 3rd Avenue at around midnight one night last April. He put some light luggage in the trunk and we started to drive to his destination at West End Avenue and 83rd Street. He told me he'd just been dropped off there on 57th Street by the driver of an airport shuttle bus and was pissed off at the driver because he wouldn't take him all the way home. He was a flight attendant for American Airlines who had just completed a long day's work and wanted to get home without a hassle. Now he had to pay for a cab ride.

I've always thought that his job was intriguing and adventurous, so I found myself asking him the same question that is often asked of me: "What was the wildest thing that's ever happened to you?" Here's what he told me.

He said he used to be based in Boston and that Flight 11 from Boston to Los Angeles was a regular run for him. Flight 11 was the plane that flew into the north tower of the WTC. Had it not been for his own good fortune he could easily have been scheduled to work that flight. But he wasn't penciled in that day. The crew who perished were all friends of his.

He said that he did work that flight on Sept. 3rd and was scheduled to work it again on Sept. 13th and Sept. 17th. On the Sept. 3rd flight one of the passengers, he said, was Mohammed Atta, the leader of the hijackers. This was confirmed by flight records, but my passenger didn't need to have his memory tweaked when he was interviewed by the FBI. He remembered him.

He said that Atta was traveling alone and was noticed and talked about by all the attendants during the flight due to oddities in his behavior. He would not make eye contact with anyone. He spoke to no one. He wanted no food, drink, or anything from any of the attendants for the entire six hour flight. In short, he stood out. He did not seem at all like a normal passenger.

I found the story encouraging in a way. It bears out what a veteran prosecutor in NYC once told me about the possibility of crime in a taxi cab: "the one you think it is, it is". For all their evil brilliance, the hijackers were still not clever enough not to be noticed by the people who work the planes day in and day out. 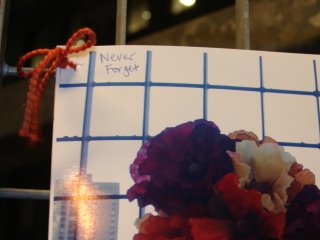 Posted by Eugene Salomon at 11:50 PM 4 comments: Links to this post