Meanwhile, At The Hess Station...

You've never seen a gas station like the Hess Station at 45th Street and 10th Avenue in Manhattan. With twenty-four pumps, it is the biggest in New York City. And the very fact that it even exists on the island of Manhattan gives it the distinction of being part of a vanishing breed. Like record stores and men who smoke pipes, gas stations in Manhattan are on the verge of extinction.

Well, perhaps I should qualify that by saying "south of 96th Street in Manhattan". If you're not familiar with the demographics of the city, let me explain. When you think of "New York City" - the business and cultural capital of the world (some say) and the kind of people who make it so - you're thinking of Manhattan below 96th Street. Above that you have the sections known as Harlem, Spanish Harlem, Washington Heights, and Inwood. These are neighborhoods which could just as well be in any of the other four boroughs (Brooklyn, Queens, Staten Island, the Bronx) of New York City. They have their own characteristics, good and bad, but they don't have the same flair, energy, or pizazz as Manhattan south of 96th Street.

What's been happening over the last dozen years or so is that real estate developers have been offering the owners of gas stations so many millions of dollars for the purchase of their tiny plots of land that they'd be fools to turn them down. Up goes the thirty-five story luxury high rise with a pool and a spa on the twenty-ninth floor and into memory goes the Gaseteria. In fact, south of 96th Street - a place where 13,287 yellow cabs must fill up their tanks twice a day and hundreds of thousands of other cars and trucks clog the streets - I can count only eleven gas stations still in existence. At the same time, I can count eleven others that have disappeared in the last five years. It's quite common for a motorist to pull up next to me at a red light, roll down his window, and beg me to give him the answer to this desperate question: "Hey, buddy, can you tell me where there's a gas station around here???"

So you can imagine the kind of business those few gas stations which are still around are doing, and none are busier than the Hess Station at 45th and 10th. Five o'clock is when the shift changes for most cabs and this station is in an area where there are several taxi garages, including my own, so you've got an invasion of yellow taxis all zeroing in on the Hess Station at around this time. Picture this scene: every pump taken by a cab or an occasional private car, two or three cabs waiting in line behind the cabs that are already at a pump, more cabs waiting behind them out on the street, a few cars trying to circle the station in order to find a hoped-for empty spot, drivers waiting on line to pay for their gas or to get their change, night shift drivers walking around looking for their cabs, horns honking, people yelling, tempers flaring.

It's so bad that they actually have speed bumps surrounding the station - when have you ever seen a gas station with speed bumps? - and they need a couple of employees out there directing traffic to try to keep order.

"That motherfucker cut in front of me!"

"I don't wanna hear your shit, man, just get behind him!"

And on like that. I am quite used to it, of course, and barely pay attention to the craziness surrounding me as I walk around the place looking for the the cab I myself will be taking out on the streets for the next twelve hours. A couple of weeks ago, however, as I was performing this daily ritual, something odd suddenly caught my eye: a pair of legs sticking out from under the opened front door of an unmoving taxi. 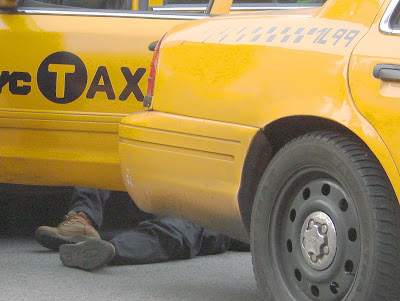 I walked around to see what was going on and found a cab driver lying flat on the pavement, face up, eyes open, and not in any apparent pain. He was just lying there. And what was equally strange was that no one was attending to him. You'd think that when someone is lying flat on his back in the middle of a gas station with cars in motion all around him somebody would be trying to assist him. But, no. 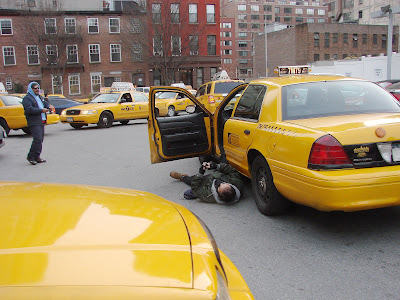 I walked over to another cab driver who looked like he knew what was going on.

"Trying to say the guy hit him. But he just fell down on his own. I saw it."

I looked over to the person he was indicating, an employee of the Hess Station who was in an animated conversation with another employee who I knew from prior acquaintance to be the supervisor of the place. He seemed to be explaining to her what had happened and she seemed to be believing what he was saying as she, too, wasn't showing any signs of believing that the guy might actually be injured and in need of assistance. Looking back at the guy lying there, I noticed that he was now talking to someone on his cell phone. 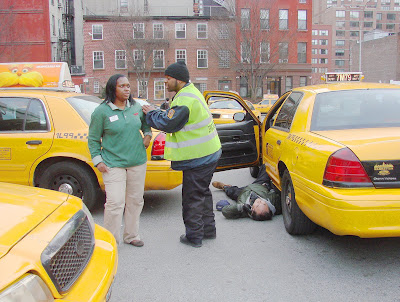 The whole thing was comical. I mean, here was this super-busy gas station with cars moving all around all over the place and there's this guy lying flat on his back in the middle of the whole thing talking on his cell phone! And no one is paying any attention to him. It was like one of those What's Wrong With This Picture? things. A farce.

Seeing it as a fraud-in-progress, I, too, felt no impulse to do anything to help the guy and went off looking for my own taxi d'noir, 2K53, with a smile on my face. A couple of minutes later, not finding my cab, I checked back in on the scene. By this time the cops had arrived and, being cops, were all serious and trying to understand what was going on. A female officer was trying to get the cab driver to his feet. 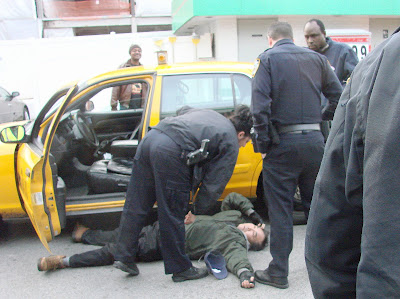 However, he was apparently a helpless slab of meat who couldn't move his legs and she couldn't hold up the weight of his body, so she lowered him back down to the pavement. Another cop was shouting out to no one in particular, "Did anyone see what happened?" Nobody came forward. "No one saw anything," the cop barked out, again at no one in particular, with a touch of disgust in his voice. 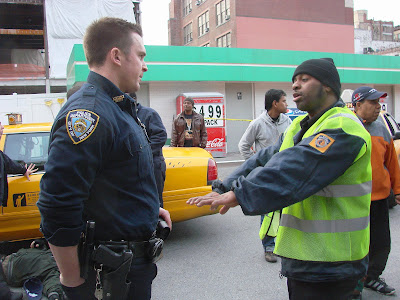 I came forward. "A cab driver told me he saw what happened," I offered. "He said the guy was faking it. I don't see him around, though."

"That's hearsay!" the cop growled at me. Then he turned his back and walked away.

Well, excuse me. He was right, of course, but what about that "courtesy" thing? I shrugged it off and resumed my search for 2K53 and, just as the ambulance, lights ablaze and siren blaring, was arriving, I spotted it coming down 44th Street. The day driver told me that, fortunately, he'd already filled the tank at another gas station, so all I had to do was get in and drive away, which I did. This was lucky because, with all this madness at the Hess Station, it was going to take half an hour to get in and out of the place. I drove 2K53 up to 46th and 10th, did ten minutes of clean-up, and set off for my night's adventures. 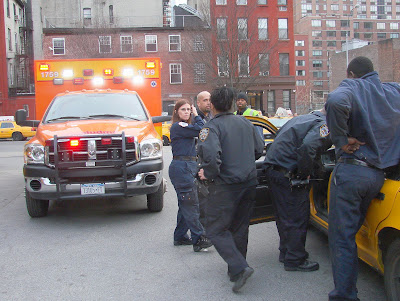 The next day I was back at the Hess Station at shift change time and was curious, of course, to know what had happened, especially if the cops had arrested the station's employee. So when I spotted him standing around I asked him exactly how the whole thing had gone down. He told me his version of the story, which I found completely believable.

He had yelled at the cab driver, he said, to move his cab behind some other vehicle in the station. The cabbie, probably tired and irritable after a long day in New York City traffic, took offense to the way he was being spoken to and stepped out of his cab to scream back at him. He then "got in the face" of the Hess Station guy and, in retaliation to the cabbie's too-closeness, the Hess Station guy lightly pushed him back. In response to his being lightly touched on the chest, the cabbie collapsed in a heap on the pavement, thus setting off the much ado.

"So were you arrested?" I asked.

He had not been. The paramedics could find nothing wrong with the driver, he said, so the cops saw no reason to make an arrest. And that was it. The driver miraculously regained his ability to walk and drive a cab and he drove away. The EMTs (Emergency Medical Technicians) drove away in their ambulance. And the cops drove away in their cruisers.

It will be a comedy.

It's going to be called Welcome To New York City.

And this will be the first scene in the movie.


Then again, maybe I'll just call it Click Here For Pictures From A Taxi.
Posted by Eugene Salomon at 3:53 AM 3 comments: Links to this post