Bloomingdale's had the best Christmas windows this year, I thought, because of the originality and delightfulness of their concept. They took a Tony Bennett CD of Christmas standards and created windows for several of the songs, depicting visually what is being suggested by the words and melodies. Then they set up speakers and played the Bennett renditions so passerby on the sidewalk could not only see the scenes in the windows but could also hear the tunes that were their inspiration. It worked well.

One of the windows was of particular interest to me - Santa Claus Is Coming To Town - because, amazingly enough, I once had its composer in my taxi. I say "amazingly" because this song was written in the 1930s - it's been around forever - and it wouldn't seem possible that its author could have ever been in the cab of someone who's driving in the year 2008. But it did happen...

Early one evening in July, 1983, I was cruising down Lexington Avenue looking for a fare and made a right on 69th Street. A doorman from a luxury high-rise hailed me and directed me into the driveway of his building. Waiting at the entrance were an elderly couple. The gentleman was rather frail and was assisted into my cab by the doorman. Their destination was the New York Athletic Club, an old-school establishment on the very exclusive Central Park South. It's about a seven-minute ride.

Now if there's one thing I like it's when I meet people who are well up in age yet who are still active and enjoying themselves. Here was just such a couple. They had a pleasant air about them and I could easily tell that they were the conversational types. I had been driving a cab for about 6 years at that point and that was plenty enough of experience to be able to perceive the talkers from the leave-me-alone-and-just-drive-ers. So chat we did.

As I recall, our conversation began on the subject of the New York Athletic Club. Since it's called an "athletic" club I naturally assumed that athletics would be occurring there. But my passengers, although they were certainly out and about, let's face it, they were well beyond whatever "athletic years" they may have enjoyed. So I said something along the lines of, "The New York Athletic Club? What, are you going to work out?" This, of course, was meant as a joke and was taken as one. Whereupon I was informed that the NYAC has on its premises an excellent dining room and that was their specific destination.

And the secret word was "pout".

Groucho Marx used to have a quiz show in the '50s called "You Bet Your Life". One of the gimmicks of the show was that if any of the contestants happened to use the "secret word" (which the viewing audience had already been let in on) in conversation with Groucho, he'd automatically win a hundred dollars. And if this happened, a duck doll with a cigar in its beak would suddenly descend on a string along with musical fanfare.

Well, it was as if I had been on that show. I had said the secret word - his word - and the gentleman in the back seat suddenly told me, seemingly out of nowhere, that he was the person who had written the song "Santa Claus Is Coming To Town" and that his name was J. Fred Coots. 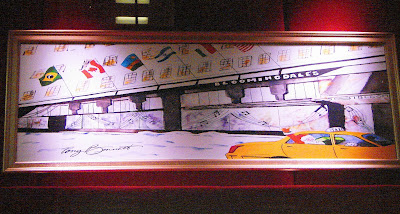 I, of course, was fascinated and delighted to be so informed and this led to a brief conversation about the song and about his career. He had been what is known as a "tin pan alley" composer, had written hundreds of songs, and many shows as well. One of his songs, with which I was familiar, was a hit for Pat Boone in the '50s called "Love Letters In The Sand".

When we arrived at the New York Athletic Club I got out of the cab and came around to help him out, as he was well into his '80s and needed a little help in the taxi-extrication process. He put his right hand into my own and I hoisted him up a bit so he could get his legs into the proper exiting position. And the thought occurred to me as I did this that the hand which had written this song - so much a part of our culture and something which has brightened the lives of millions of people for decades - was in my own. It was an honor, really.

His wife, who also struck me as a lovely person, came around and gave me some motherly advice as she began walking toward the NYAC entrance. "Don't drive late at night," she said under her breath, as if this was something no one else should hear.

I think of that ride every Christmas season.

And I also think this: why not click right here for Pictures From A Taxi?

Posted by Eugene Salomon at 3:41 PM 2 comments: Links to this post