With the U.S. publication of Confessions Of A New York Taxi Driver approaching on January 28, I will occasionally be deviating from the kind of content I usually publish here to make announcements of promotions of the book in various media.

The first of which is:

There will be a book review in the book section of the NY Post this coming Sunday, Jan. 19. I’m still not sure exactly what this will consist of, but since a Post photographer came over to Columbus Circle on Tuesday to snap some shots of moi in my cab, I’m expecting it to have a picture or two and be more than just a blurb. So please pick up a copy of the Post on Sunday if you can and check it out.

Stay tuned!
Posted by Eugene Salomon at 1:00 AM 3 comments: Links to this post

Email ThisBlogThis!Share to TwitterShare to FacebookShare to Pinterest
Labels: book reviews, interviews, my book, the media

I picked up a twenty-something fellow a few nights ago in Chelsea who was on his way to 57th Street and 3rd Avenue in Midtown. For five minutes there were no words spoken between us except for my “hello” and his announcement of his destination. And then, this:

“Are you the Eugene Salomon who wrote the book Confessions Of A New York Taxi Driver?” I thought one of my ego gratification wet dreams had finally come true - I’ve gotten someone who’s already read my book as a passenger in my cab.

“Yes, I am,” I replied as I geared up mentally for some serious adulation. Surely he was about to tell me that not only had he read the book, he loved the book; no, no - he adored the book, he couldn’t put it down, he’d told all his friends about it! It would be as if he’d just read The Shining and the next day there was Steven King somehow sitting in his living room. Incredible!

“You read it?” I inquired, buoyantly.

Deflated, I asked him how, then, did he know about the book and me? His answer was something that is really a sign of the times: he’d looked at my name on my hack license and silently did a search on his device while we were driving across 23rd Street. And there it was.

It was another example of the world we live in today. (See the post
“Speed Of Particle Flow”.) Fascinating, but kind of disturbing at the same time. Now you can sit in a cab and know whatever’s on the web about your driver without him knowing that you know. But putting aside this dubious aspect of this ability, it turned out to be the means for a lively conversation and a great ride. I told my passenger, whose name is Mark, all about the book and how it came to be. And as a reward for his interest, he is now the proud owner of one of these: 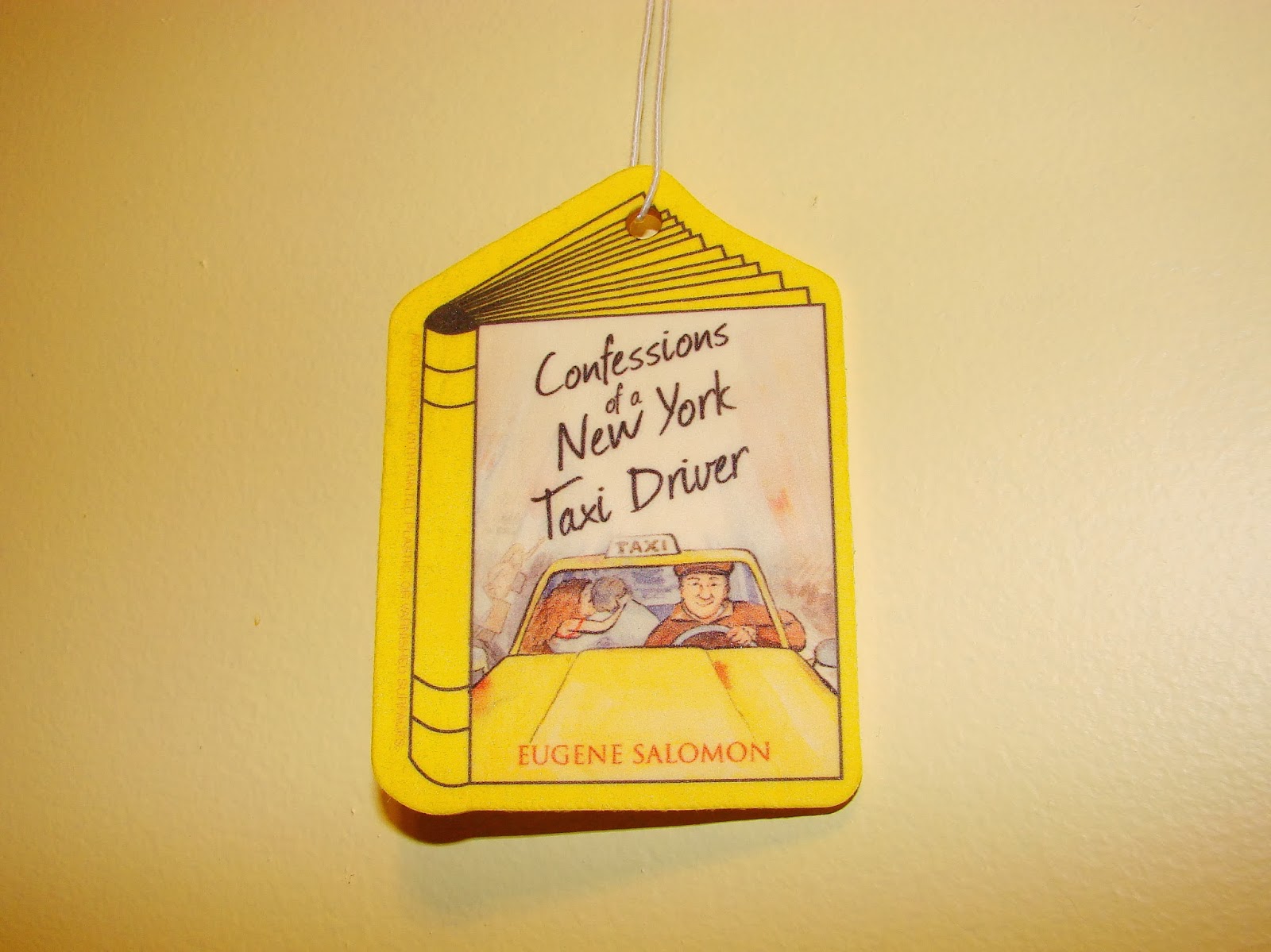 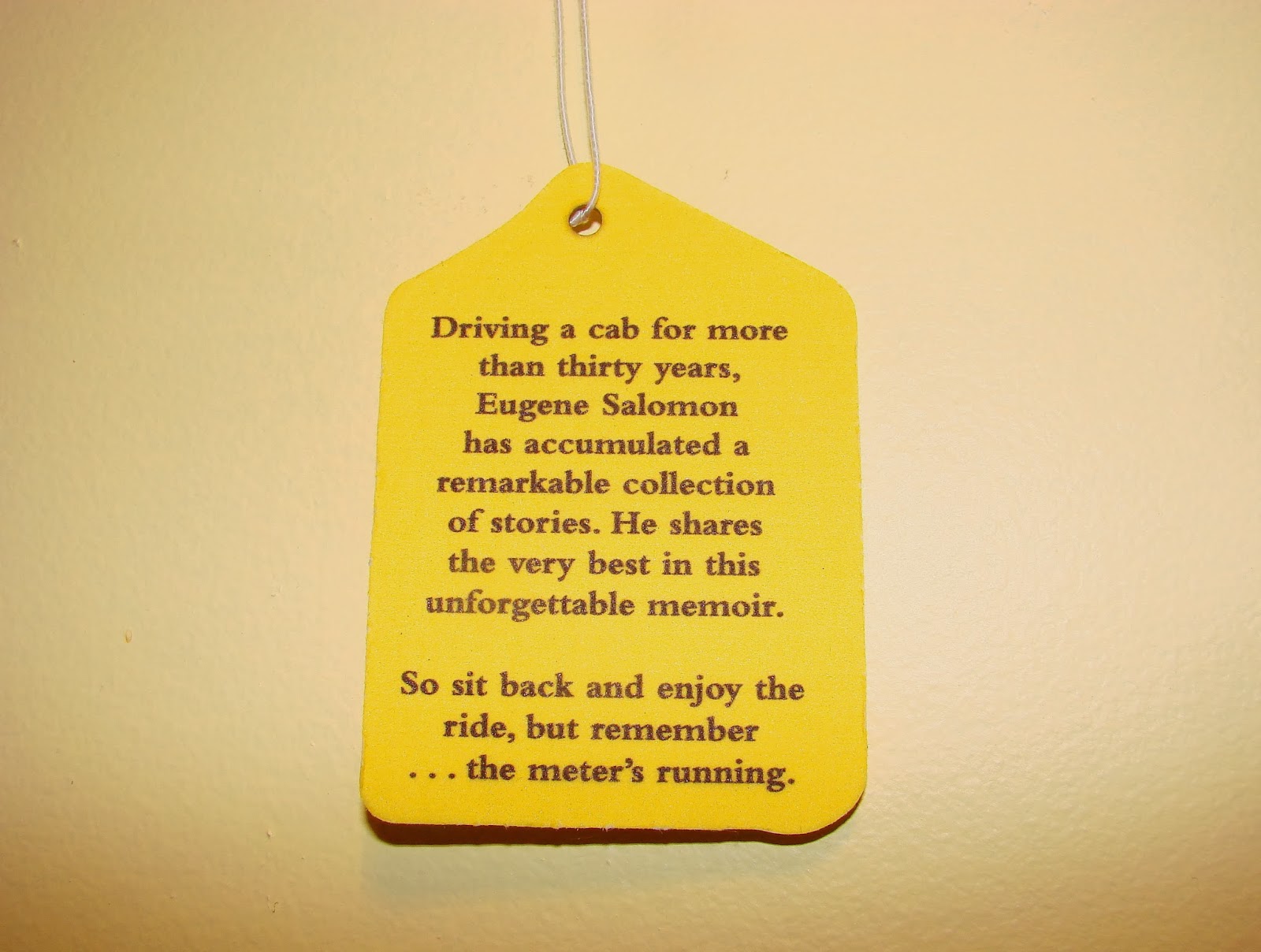 This is the brainchild of Victoria, my publicist at HarperCollins, who sent them out to media around the country with an advanced copy of the book to attract attention and hopefully get lots of reviews. (The scent is apple, as in “The Big Apple”. Cute.)

Publication in the U.S. will be on January 28th, so Mark will have to wait until then to get his copy - he sent me an email the next day saying that he’s pre-ordered it.