You know, this blogging phenomenon has to be one of the greatest things that's ever happened to humanity. We are living in an age of freedom of the press that would have been beyond imagination just a few years ago. The idea that a person such as myself can sit in his home and instantly publish communications with hundreds or even thousands of people all over the world... well, it's staggering if you think about it.
Let's be resolved to never let anyone take it away from us.
Having said that, I'd like to thank every single person who has come to this site in this passing year and found it worthwhile to actually read anything I've had to say. Time is valuable. Thank you for spending some of it here.
Here's hoping we all have a 2008 we can look back at and say, "Wow, that was a great year!"
May your best days be yet unseen,
And may all your lights be green. 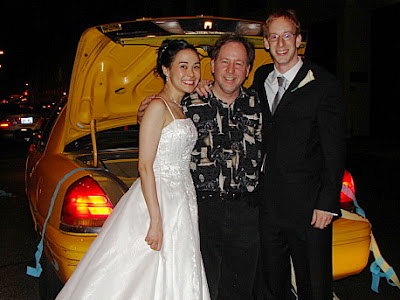 (A picture I'm rather fond of from the post A Day In The Life. Happy New Year everybody!)

Posted by Eugene Salomon at 4:57 AM 2 comments: Links to this post

People come from far and wide to see the window displays at the major New York City department stores. Here's a sampling... 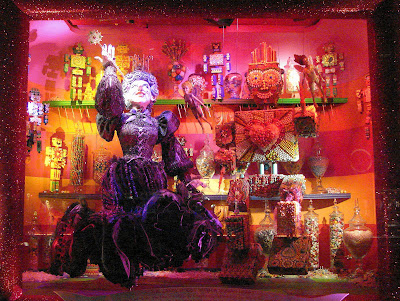 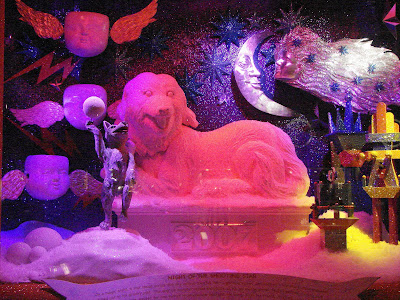 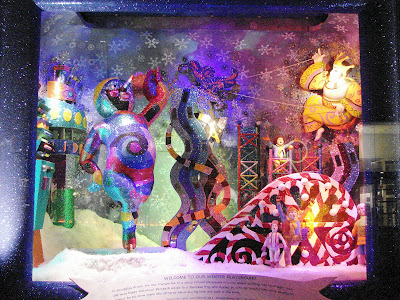 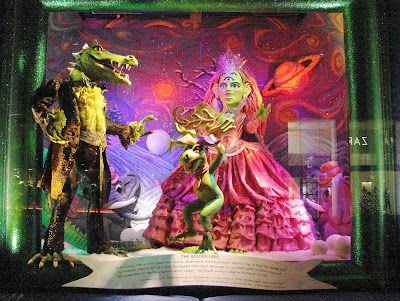 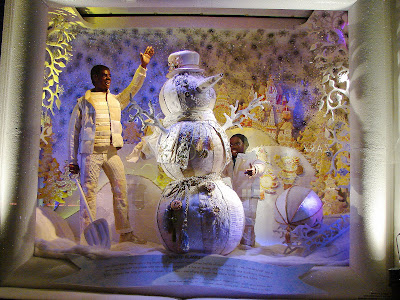 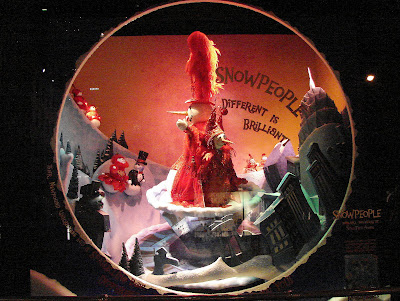 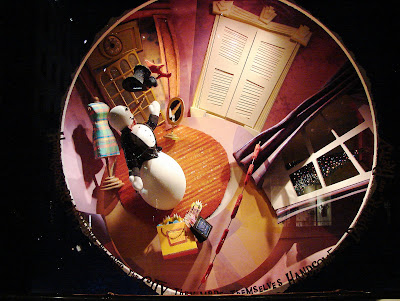 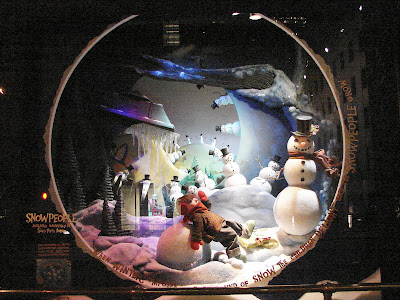 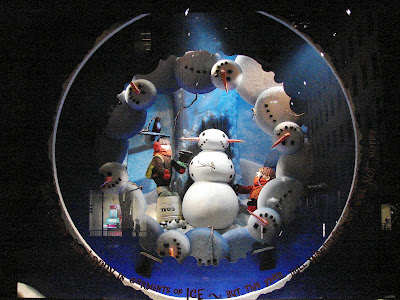 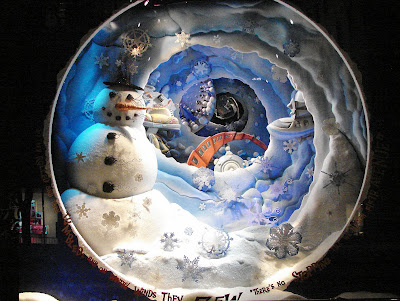 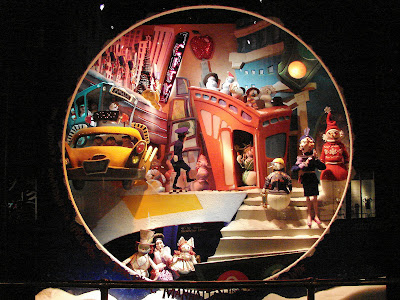 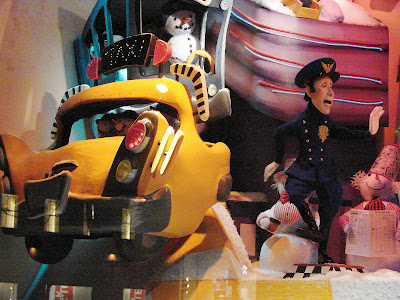 This window was my favorite. (Of course.) 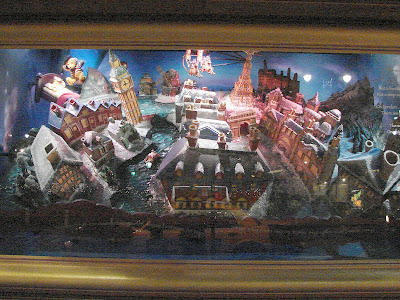 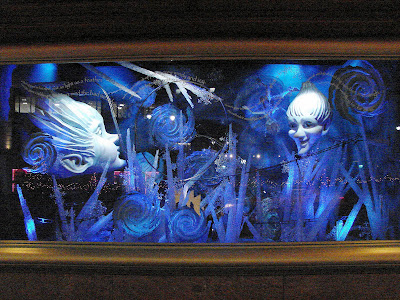 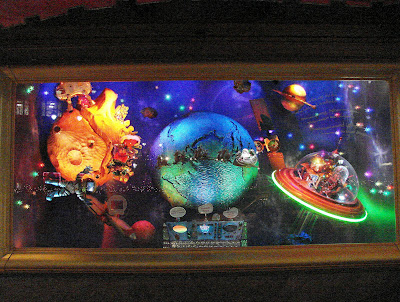 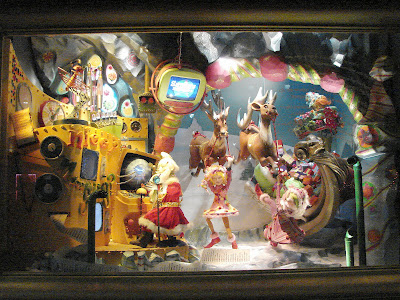 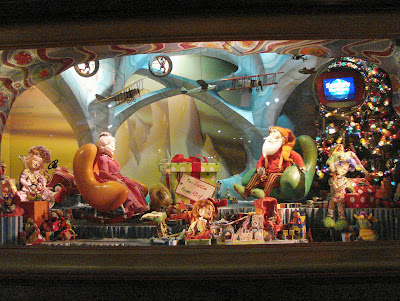 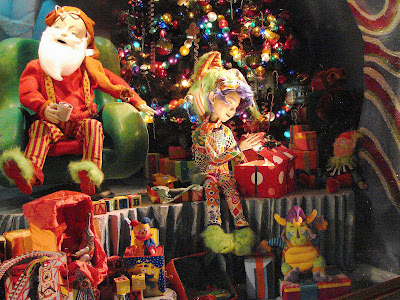 Posted by Eugene Salomon at 5:39 PM 3 comments: Links to this post

Something happened a few days ago that has only happened three other times in the 30 years I've been driving a cab: I had the same passenger twice in the same shift.

If you're like me, when something like this occurs you immediately start calculating the odds against it. In this case, it's not difficult to do. There are 13,187 medallion (yellow) cabs in New York, so there are the odds right there - 13,187 to 1. But also if you're like me you wonder if it's strictly coincidence or if there's some other intangible force (let's call it karma) at work.

If you've been reading this blog you know that karma vs. coincidence is a recurring theme here. I don't say that there's actually no such thing as coincidence (as some extremists do), but I am definitely on the karma side of the fence. So please read what happened, and then you tell me: karma or coincidence? Here goes...

At 6:30 pm a woman got in my cab at 42nd and Lex who was going up to 55th and 3rd. She spent most of the ride on her cell phone and only when we were approaching the destination was there any conversation, and that was merely me asking her which side of 3rd Avenue she'd like to be dropped off on. She said she was going to 919 Third Avenue and didn't know where the building was, but she'd find it, so wherever I wanted to stop the cab was all right.

As it turned out, I know the building well because it's a 45-story office tower I often wait in front of to get a passenger. I pointed it out to her and made a humorous comment about the place as she handed me the fare.

"Make sure you don't bump into anyone when you enter the lobby," I said. "Everyone who works in that place is a lawyer."

It's true. Nearly the entire building is occupied by law firms, and that's why I often wait there for a fare. Lawyers work late and they're still streaming out of the joint between 7 and 9 pm.

My passenger seemed amused by my comment so I added another quip. "In fact," I said, "if I ever need free legal advice, I just wait in front of 919 Third Avenue. Everyone who gets in is a lawyer. It never fails."

This brought a big smile. She handed me the fare and an above-average tip, waved goodbye, and was on her way. I pulled out onto 3rd Avenue feeling good about the ride. It's always nice to leave them with a laugh.

My next passengers, two businessmen going to the Penthouse Club on 45th and 11th, got in almost immediately. The crosstown traffic was awful and it took nearly half an hour to reach the place. The following passenger went to Central Park South between 6th and 7th. And the one after that brought me back to the East Side, to Sutton Place at 56th Street.

In the perpetual hunt for the next passenger, my normal move from this location is to drive west on 55th and pull up in front of 919 Third Avenue. The entrance to the building is actually on 55th Street and there's usually room to stand there so you're not blocking traffic. So off I went on my usual route, but I didn't have to wait as I approached the tower. A person who was leaving the building had already spotted me and was giving me a hail.

It was her - the same woman whom I had dropped off at this building an hour ago was now leaving it. We recognized each other before she even opened the door and of course as we began a new trip to her new destination - 40th and Lex - we remarked on how slim the chances are of this ever occurring.

Nevertheless, if this was all there was to the story I would probably say it was just coincidence. The odds are 13,187 to one, not a hundred million billion kazillion to one. 13,187 to one can happen.

My passenger went on to tell me why she had gone to 919 Third Avenue in the first place. She represents a construction company and was there to make a presentation to a law firm that is considering doing business with her group. This meant that she had to stand in front of a bunch of lawyers she'd never met before and speak. So as a way of breaking the ice she told them she'd been taken to their office building by a cab driver who knows the place is filled with lawyers and gets free legal advice by waiting there for fares.

She said they were "in stitches".

Now for me, this was beyond wild. This never happens! In the taxi business you quite often have conversations with people you never expect to see again. Sometimes you wonder what future effect you may have created by the things that you have said to that person, but you never - never! - actually get to find out. They go on their way and disappear from your universe.

But this time I did find out. Like a boomerang that's been tossed out into the atmosphere, it turned around and came right back to me.

I just can't believe that was coincidence because there was a factor involved beyond two ships merely passing in the night. There was an incomplete cycle of communication in the middle of this. My passenger perhaps wondering what that cabbie would have said if he knew that his comments were cracking up a bunch of lawyers as he continued to drive around the city. You get the sense that you've entered the uncharted territory of telepathy here. Something is going on. It's not just coincidence.

Okay, you're not convinced? Then come with me. There's more.

My passenger was now curious about me as a taxi driver. She wanted to know how long I'd been driving and how I liked the job. She then asked me what my most interesting story was. I replied that she'd have to give me a category of "interesting". She chose "poignant".

Well, I went immediately to the vault and pulled one out. Here is the story I told her...

One rainy day about twenty years ago a woman got in my cab with her young son, a toddler who was in the area of two years old. As she entered the taxi she suddenly realized that the top of a ring she had on her finger was gone. The ring had contained a pearl surrounded by diamonds but now all that remained of it was the thin gold band. She was distressed about the loss and was trying to come to grips with the reality that it was gone and she'd never see it again.

The little boy, meanwhile, was not particularly concerned with his mother's loss and was as cute as could be. He had no apprehension about chatting with his taxi driver and for the whole ride kept up a lively conversation with me. One thing he told me was his name. It something Eberhardt (I have forgotten the first name). He seemed to have just recently learned it and was quite proud of the fact that he did indeed know his own name.

When we got to their destination, a street on the Upper East Side, the building we stopped in front of had a sign above a ground-level office that said "Eberhardt Architecture". I said to the little boy that I bet that his daddy worked there and he enthusiastically told me that yes, his daddy did work there. The woman then paid me the fare and left the taxi with her son.

Nine hours later I had ended my shift and was gassing up the cab. In the normal course of cleaning up any debris that had been left by passengers, I opened the back door and looked for anything in the ash trays or on the floor. There, under a rubber mat on the floorboard, was the part of the ring that had been lost by my passenger.

The next day I went back to "Eberhardt Architecture" and returned it to Mr. Eberhardt, the boy's father. Only because the child had been so proud of knowing his name was I able to remember which building it had been where I'd dropped them off. If it had not been for his eagerness to have a conversation with his taxi driver, the ring, which I was told had belonged to the lady's mother and was a family heirloom, would never have found its way back home.

And that was the story.

My passenger had listened carefully.

It turned out that my passenger, who is in the construction business, knows Eberhardt, the architect, on a professional basis. Get out your calculators and figure out what the odds are against a person who asks me to tell her one of my taxi stories actually knowing one of the characters in my own story!

And when you've figured that out, please send me the answer to my new address. I'll be just beyond that signpost up ahead.

In the Twilight Zone.

(Of course you do not have to actually be in the Twilight Zone to click here for Pictures From A Taxi. But it probably wouldn't hurt.)

Posted by Eugene Salomon at 1:21 AM 11 comments: Links to this post