The Fourth Worst Thing That Can Happen To A Cab Driver

3) Some subhuman pukes in your cab.

But I never knew what the fourth worst thing might be.

A few nights ago at around 10 p.m. I was cruising for a fare on University Place in Greenwich Village. It's a narrow, one-way street that runs for only seven blocks from Washington Square up to 14th Street. I like University Place because it has several bars and restaurants on it as well as one of the great rarities in Manhattan, a bowling alley. These are all places where a cabbie is likely to find his next passenger. It's also a late-night area due to the high population there of New York University students who may be hitting the midnight oil or, more likely, hitting the midnight gin and tonic in a bar.

As I passed 13th Street, moving slowly in order to be able to stop in case I was hailed, a figure came rushing out at me from my left (driver's) side. He was a white-skinned, wild-eyed guy in his twenties whose facial expression and frantic body motion immediately struck me as WRONG. In taxi-driving, like anything that you do repetitively over a long period of time, you develop an instinct for the particles that stand out from the usual. And I could see in an instant that this guy didn't fit. People simply don't hail you like that unless there is something wrong.

Sometimes you're stuck with a person like this. You're waiting at a red light and he gets in. You know immediately that he's trouble but there he is in your cab and you've got to deal with him.

But sometimes you're not stuck with him.

You just keep driving and pass him by.

Of course you hope that he thinks that you didn't see him and that's why you didn't stop. You never want to hurt anyone's feelings. But any veteran cabbie knows that his feelings are quite secondary to your own gut instinct. The guy is trouble, you know it, and you keep your foot on the accelerator.

But it was different in this case. He came running right up next to me on the side of the cab. We made eye contact. I slowed down momentarily and glanced forward to see if the light at the next intersection, 14th Street, was red or green. It was green. This meant if I kept driving I could make the light, turn right, and be gone from this guy and whatever storms were brewing in his universe forever.

There was no "Sorry, I didn't see you" about it. It was a blatant "I see you, I don't like your face, and I reject you. Goodbye." It was ugly.

I saw him still waving frantically at me in the rear view mirror, but REJECTED had been stamped on his application form and that was that. The decision of the judges is final. I made the turn and he was gone from sight and mind.

On 14th Street the distance between University Place and the next intersection, Broadway, is quite short. Because of this and its key location at the south end of Union Square, there is normally a ton of traffic at that particular spot. And it was no different at this time. It took me close to a minute to reach Broadway and then make another right to head back downtown in search of my next fare.

It was a fare I didn't have to do much searching to find. My next passenger jumped in as I stopped at the red light at 13th and Broadway.

Unfortunately, it was the same guy.

I was in shock. I immediately wondered how he'd been able to get over to 13th and Broadway so quickly on foot, and then realized that if he'd been running he could have done it in just that amount of time. I then hoped maybe he wouldn't recognize me as the driver who had just passed him by.

I considered the situation. There was no way I could bullshit my way out of it. So I just told him the truth.

"I didn't stop for you because I didn't like the way you came running up to me waving your arms so frantically," I said. "When people do that it usually means there's some kind of trouble going on and I don't want to be a part of it."

Interestingly, he could accept that. Truth has a way of doing that, even if it's an unwanted truth. He just accepted my explanation without feeling a need to get into an argument about it.

It was as if the whole rejection incident had not taken place. I felt relieved.

But as I started to drive down Broadway, I realized this was a good thing and it was a bad thing, too. Good because what could have been a major confrontation and even disciplinary action against me by the passenger had evaporated into nothing. But bad because the truth which had caused that potential trouble to disappear nevertheless meant that this passenger was, in fact, going to be trouble himself.

Now, I am supremely confident about my own instincts as a taxi driver. I had rejected this guy on a gut level that is never wrong, from my point of view. I knew that anyone who comes running up to a cab like that and who looks the way he looked was just surely going to mean some kind of trouble for me. And now I was waiting to see what the trouble would be.

It didn't take long. The ride we were taking was a short one. So short, in fact, that he could have walked it in five minutes, which was an outpoint in itself. This was not the kind of person who spends money on a taxi like that. Although he didn't tell me why he was in such a rush, his demeanor and his hurried speech told me it was drugs. My evaluation of the guy was that he was a junkie and this was a drug "emergency" of one kind or another.

We got to Avenue A and 7th Street in about a minute and a half. I pulled over to the curb so as to not block the traffic. And then he hit me with it.

"I've gotta meet someone in that building across the street. She's got the money for the ride. I'll be right back, man."

It was literally the oldest trick in the Book of Passengers' Sneaky Tricks.

Normally what I would do in this situation would be to try to stop the passenger from exiting the cab without leaving something of value behind. Or I'd just take off with him still in the taxi and look for a cop. You don't take a ride in a cab and then announce at the end of the trip that you have to disappear into a building to get money. That's a taxi no-no and it takes just one rip-off at the beginning of a cabbie's career to learn that lesson.

But this case was different. For one thing, it was a really short ride with little time lost and only a few dollars on the meter. But, more than that, in the wider karmic view of things I kind of felt I owed it to him.

So I let him go without a dispute. I waited there for a couple of minutes if only to validate what I already knew - that there was no way this guy was coming back - and then I drove off.

But I did go away with two things of value. One was that it showed me once again that my instincts are rock solid. I knew instantly when seeing this guy first coming toward me that he was bad news and that I was right to have not stopped for him.

And the other was discovering what the fourth worst thing is.

It's the dead returning to life and coming to get you.

The horror of it.

********
Of course there's no horror in clicking here for Pictures From A Taxi. It's like strumming a banjo in a meadow on a summer day.
Posted by Eugene Salomon at 4:06 AM 3 comments: Links to this post 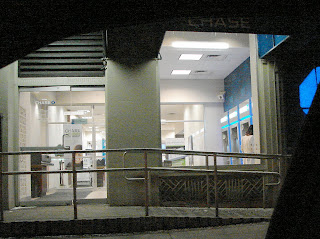 - one of the officers actually got out of his cruiser and followed her into the lobby! (he's standing out of sight behind the white pillar in this shot)
- with the cop standing ten feet behind her, she tried to withdraw funds
- she could not
- she returned to the cab and we drove back to her apartment building
- the cops followed us there
- she told me she was going to go upstairs to see if indeed there was any money in her apartment and that she was leaving her wallet on the back seat until she returned
- I said okay
- she left the cab and disappeared into the building
- the meter kept running
- she returned in two minutes with a twenty dollar bill, saying that luckily her boyfriend was there which she hadn't known before and that he had given her the money
- I didn't believe her but let her save face by pleasantly saying okay
- the original fare of $7.80 was added to the second fare of $4.60, bringing the total to $12.40. She took $3 back from the twenty, thus leaving me with a $4.60 tip "for your trouble".
- I said thank you and thought that was the right thing to do and a decent thing to say
- she left the cab and went back into her building
- I got out of my cab and walked back to the cops and thanked them, telling them I had been paid in full
- they said I was welcome and one of them added that "you've got a hard job, too"
As I drove off looking for one last fare for the night, the whole incident seemed to me to be what a fantasy of a cab driver might be after he'd been ripped off by a passenger and had received no justice at all. I mean, we expect no justice. So what happened here was surreal.
And it also answered the question of what to do when a passenger has neither a valid credit card nor any cash.
You just sit there for a moment and from out of nowhere a cop will come along to help you.
A good cop.
********
And while you're celebrating your good fortune, click here for Pictures From A Taxi.
Posted by Eugene Salomon at 9:25 PM 6 comments: Links to this post