Back in December of 2005 the Transit Workers Union in New York was making a lot of news with threats of a subway and bus strike if a settlement was not reached with the city by the 19th of that month. I thought it was just a lot of noise and would never happen.

But a passenger who was in my cab on the 18th disagreed with me. He predicted the strike would indeed occur and we had a lively conversation on the subject all the way from the Midtown start of the ride to its conclusion in Astoria, Queens. In fact, the conversation led to a bet. If the strike happened he would get a free cab ride and if it didn't he would pay me double the meter - should he ever ride in my cab again.

Well, to my surprise, there was indeed a subway strike the next day. It lasted three days, paralyzed the city at the height of the Christmas season, and made life miserable for everyone except cab drivers - we did great!

I was counting my money for weeks but in the back of my mind I knew this guy was out there somewhere looking for his free ride. I found myself thinking, after having a good money night, that, yeah, sure, I just had a good night, but what if that guy I owe the free ride to had gotten in my cab? It wouldn't have been such a good night then, would it have been?

As time went on I would go through phases. For a while I would be cocky, thinking Ha! He'll never catch me! And at other times I'd resign myself to my fate - yeah, as sure as the sun rises, this guy is gonna wind up in my cab again. And then I'll have to pay! A black cloud was beginning to find that it enjoyed hanging out over me.

Well, if you read this blog you know how I feel about fate. It took nearly two years, but he finally tracked me down last September. If I'd been a little sharper I would have recognized him from the street and just kept on driving. But I'm not as fast as I used to be so I stopped the cab when he hailed me and then realized too late what I'd done as he sat down in the back seat.

The Reaper had arrived and there was no way I was going to be able to weasle out of it, so I thought, why try? I just told him right off, okay, a bet's a bet and I always pay my bets, so this ride is free. And headed off to Astoria. And I'm thinking maybe it's best to just put this thing behind me and start enjoying life again.

But he wouldn't hear of it.

In an act that can be described only as a blatant disregard for the welfare of others in general and for me in particular he refused to let me settle the debt I had incurred and then went so far as to give me an extremely generous tip despite my protests. And to make matters even worse, he did all this while maintaining a cheerful disposition and engaging in a friendly conversation.

More time passed and it seemed I might never recover from this assault to my self-esteem. I had been turned into a welsher and now a new black cloud had settled in over my domain. My life had gone from merely miserable to completely horrible and I didn't see any way out.

Until I came up with a plan which, I'm happy to say, I was able to execute two nights ago.

I knew it was just a matter of time before I'd get this guy in my cab again. That's just the way life is. So on Tuesday it happened and I was ready for him. I knew it would do no good to bring up the subject of my continued indebtedness so I didn't even mention it and drove him once again out to Astoria, once again enjoying a lively conversation with him, and once again receiving an outrageously generous tip.

But then I tricked him. I told him about this blog and got him to agree to let me take his picture. And here it is... 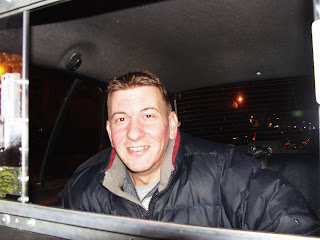 His name is Bernie and he works as a bartender at a bar inside one of the best hotels in town, the Michelangelo on 7th Avenue and 51st Street.

Now here's what I need you to do. The next time you're in New York put it on your list of things to do to drop in at Bernie's bar in the Michelangelo. Start a conversation with Bernie. You'll find him to be one of the friendliest guys you've ever met. Then, as you're about to leave, put a scowl on your face and tell him you know all about him because you read about him in Cabs Are For Kissing and slam an extravagently generous tip down on the bar just before you head for the door. He'll never know what hit him.

And Revenge, thou sweetest berry on the vine, shall be mine.

Also for your "to do" list: click here for Pictures From A Taxi. Please... don't make me beg.

Posted by Eugene Salomon at 2:28 AM 6 comments: Links to this post