I have done a pre-recorded interview which will be aired on television in the New York City region on NBC's The Debrief With David Ushery at 5:30 a.m. on Sunday, Feb. 23.

What's that, you say you'll be asleep at 5:30 in the morning and you're damn well not getting up to watch it? Well, so you won't feel guilty, that's what DVRs are there for!

OR if you have no DVR or are somewhere else in the world other than in the New York City region, you could do a search using these words: "nyc-cabbie-writes-book nbc" and presto you'll be able to see just the video of the five minute interview without the rest of the show.

I am happy with this interview. We did it on Thursday on the street outside the famous 30 Rock building in Midtown. The host, David Ushery, was more than accomodating by showing my book to the camera, mentioning my blog, and asking his questions in a lively manner. His show, which I've seen in the past, is done in an interesting and unique format. He walks around a newsroom and speaks with reporters about newsworthy events of the past week. You get boots-on-the-ground, insightful commentary from those close to the stories. Plus there are interviews, such as my own, with New Yorkers who've done something noteworthy. (If I don't say so myself!)

So I recommend watching the whole program if you can.

Posted by Eugene Salomon at 3:44 AM 3 comments: Links to this post

Email ThisBlogThis!Share to TwitterShare to FacebookShare to Pinterest
Labels: television, the media

It’s quite common in New York City to see people kissing each other on the sidewalk, like this: 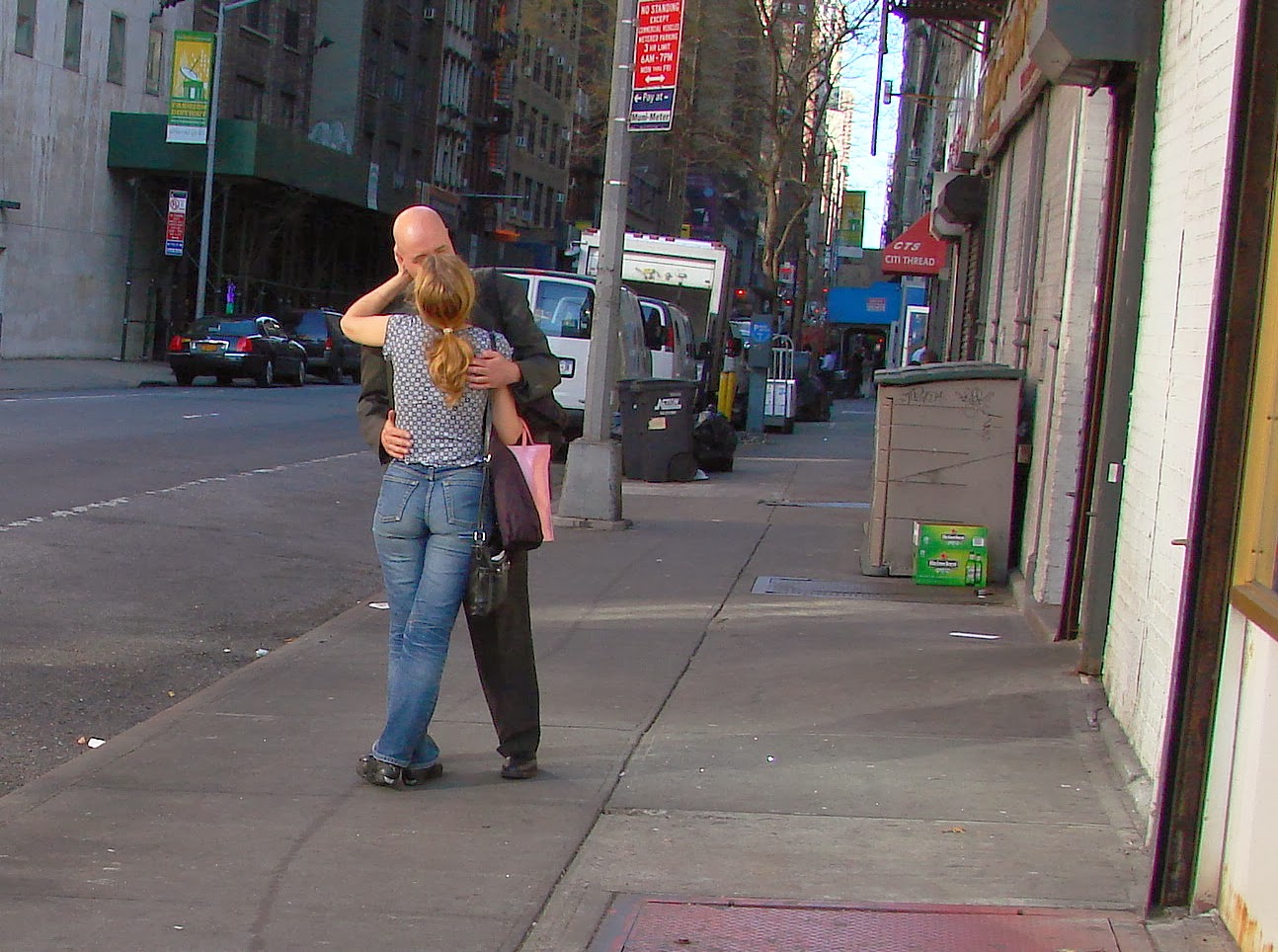 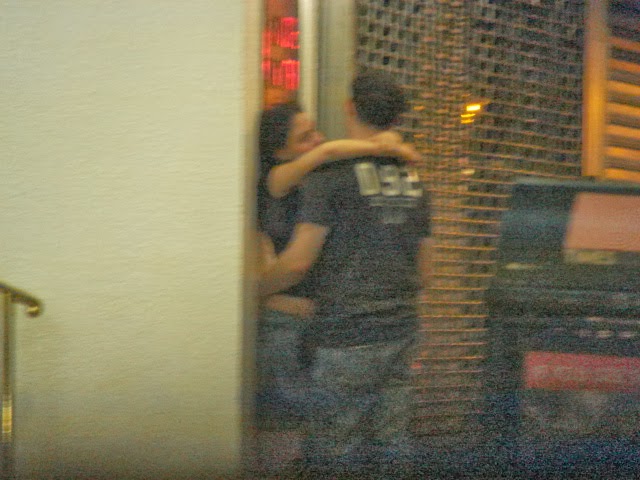 What’s not common is to see someone hailing a cab while kissing someone. Imagine one of the people in these pictures waving an arm in an attempt to communicate to a taxi driver that his services are required while maintaining the kiss. In Chapter 16 of my book this is referred to as “The Kissing Hail”. It’s a thing of beauty, requiring balance, agility, peripheral vision, upper body strength, and a need to make a train.

I saw one recently in Tribeca at around 10 p.m. as I was driving up Hudson Street in search of my next passenger. I was impressed not only with the inventiveness of the hailer, a young man with an attractive young lady wrapped around him, but with my own ability to see it coming. You see, an alert taxi driver sees people kissing on the sidewalk not only as an urban sideshow, but as a business opportunity.

It comes in two forms:

1. There’s the First Time We’ve Done This kissing. Usually (but not always) seen quite late at night - say, after 11 - it’s what happens after two people have either been out on a date or have met in a bar, have taken a liking to each other, and are bringing the attraction to its next logical step. They will often be propped up against the side of a building, perhaps just off the sidewalk a bit, in an attempt to create their own little space. There’s no separating them. An explosion could go off on the other side of the street and they would continue to stare into each other’s eyes, run their hands gently across each other’s faces, kiss passionately, come up for air, and do it again.

There is no business opportunity here. Just keep driving.

2. But then there’s the Until We Meet Again kissing. Again, two people are embraced in a passionate kiss, but there are subtle differences. They are usually close to the curb. There is no gazing into each others eyes. There are no exploratory caresses. There’s just the tight embrace and the prolonged kiss, as if to say, “I want you to remember that I love you, you mean a lot to me, sorry we now have to part, we’ll be back together again soon.”

When a cabbie sees this, slow down. One of them is about to hail you.

What happened on Hudson Street was that I was cruising along, looking for my next one, but caught a red light at Franklin. As I waited for the light to change I couldn’t help but notice the two people going at each other with some vigor. After fifteen seconds or so of careful observation, I decided they were Until We Meet Again kissers. I was pretty sure one or both would be wanting a taxi, but I had a problem. There was construction taking up half the road and I wouldn’t be able to stop and wait for them to cease osculation without blocking cars behind me. I would have to keep moving when my light turned green.

As more seconds ticked by, tension grew. The light on the Franklin Street side turned yellow. Then red. My light turned green. Damn, why don’t these two stop kissing each other already? I mean, come on, enough! I inched my cab forward, keeping an eye on them. Slowly, slowly, until I heard a car behind me start leaning on his horn (a New York City tradition). And then, just as I was about to step on the gas and forget about them, it happened…

Yes, without parting bodies, without unlocking lips, without even looking at the vehicles approaching on Hudson Street, the guy’s hand went out behind his back and started waving! I hit the brakes, pulled over, and brought the cab to an abrupt stop. The cars behind me expressed their displeasure and one driver gave me a little scowl as he squeezed around me, but I didn’t care. This was business. Like a fisherman reeling in his line, I awaited the arrival of my catch.

The young gentleman walked his girlfriend to the cab, gave her a final kiss, and she climbed in. “Make sure she gets home safely,” he said, not so much really a communication to me but a gesture meant to give her one last assurance of his caring about her before they parted for the evening. I thought it was a nice touch.

And off we went on a long ride out to Queens.

The hail was so extraordinary that I felt I should acknowledge its brilliance, even though it wasn’t she who had performed it. So I told her about “The Kissing Hail” and how rare it is to see one and how it’s in a book that I just happen to have on my dashboard and here take a look at page 323 and why yes as a matter of fact I wrote it myself.

My passenger was kind enough to overlook my need for attention and we engaged in one of those conversations that can occur sometimes in a taxicab by which at the end of the ride you feel that you’ve made a new friend.

There’s something about the randomness of that, like the randomness of life itself, that I find so appealing. It’s the reason I’ve stuck with this profession for so many years, if truth be told.
Posted by Eugene Salomon at 3:47 AM 3 comments: Links to this post

Email ThisBlogThis!Share to TwitterShare to FacebookShare to Pinterest
Labels: about taxi driving, hailing a taxi, kissing, my book

I've had an article published in the online edition of Time Magazine.

It's called "The Art of Hailing a Cab". In it I offer sage advice as to the proper way of executing this vital form of urban communication. Here you will also find the official "International Taxi-Hailing Point System" which puts in ink how points are awarded for scoring hails, from 1.0 at the bottom to 6.0 - the "perfect hail" - at the very top. Like ice skating.

It's actually an abbreviated version of a section of Chapter 16, "Taxi!", from my book. Of course you'll have to buy the book to read the whole thing.

So there's the obligatory plug.

Directly below the article is a promotional one-minute video which the folks at Time were nice enough to allow us to include. This was created by Scooter McCrae, the video wizard at HarperCollins, who rode around with me for six hours one night. Six hours of filming reduced to a one-minute video - that's show biz.

Note: Go to the post "Get 'Em While They're Hot" to see the video.
Posted by Eugene Salomon at 4:33 AM 4 comments: Links to this post

Email ThisBlogThis!Share to TwitterShare to FacebookShare to Pinterest
Labels: "how to", hailing a taxi, my book, the media, videos

On The Radio Tomorrow

I will be interviewed by long-time radio personality Joan Hamburg tomorrow, Sunday, Feb. 2, at "11:30ish" in the morning. The interview was actually recorded last Thursday so what will be broadcast is taped and perhaps edited a little. It's about 10 - 15 minutes in length. They couldn't give me an exact time for the airing of my segment, so if you'd like to hear it I suggest tuning in before 11:30.

The Joan Hamburg Show broadcasts on WOR, 710 on the AM dial, in the New York City area. It's also syndicated nationally by the WOR Radio Network in a special weekend "Best Of" program. So if you're not in the NYC region, check for the position on the AM dial for WOR in your own part of the country. A good google search should do it.

We discussed my book, of course, but Joan is a big consumer advisor and asked a few questions about something that is often on the minds of many taxi passengers: what the hell are those surcharges on the right side of the meter all about?
Posted by Eugene Salomon at 4:08 PM 1 comment: Links to this post

Email ThisBlogThis!Share to TwitterShare to FacebookShare to Pinterest
Labels: interviews, the media 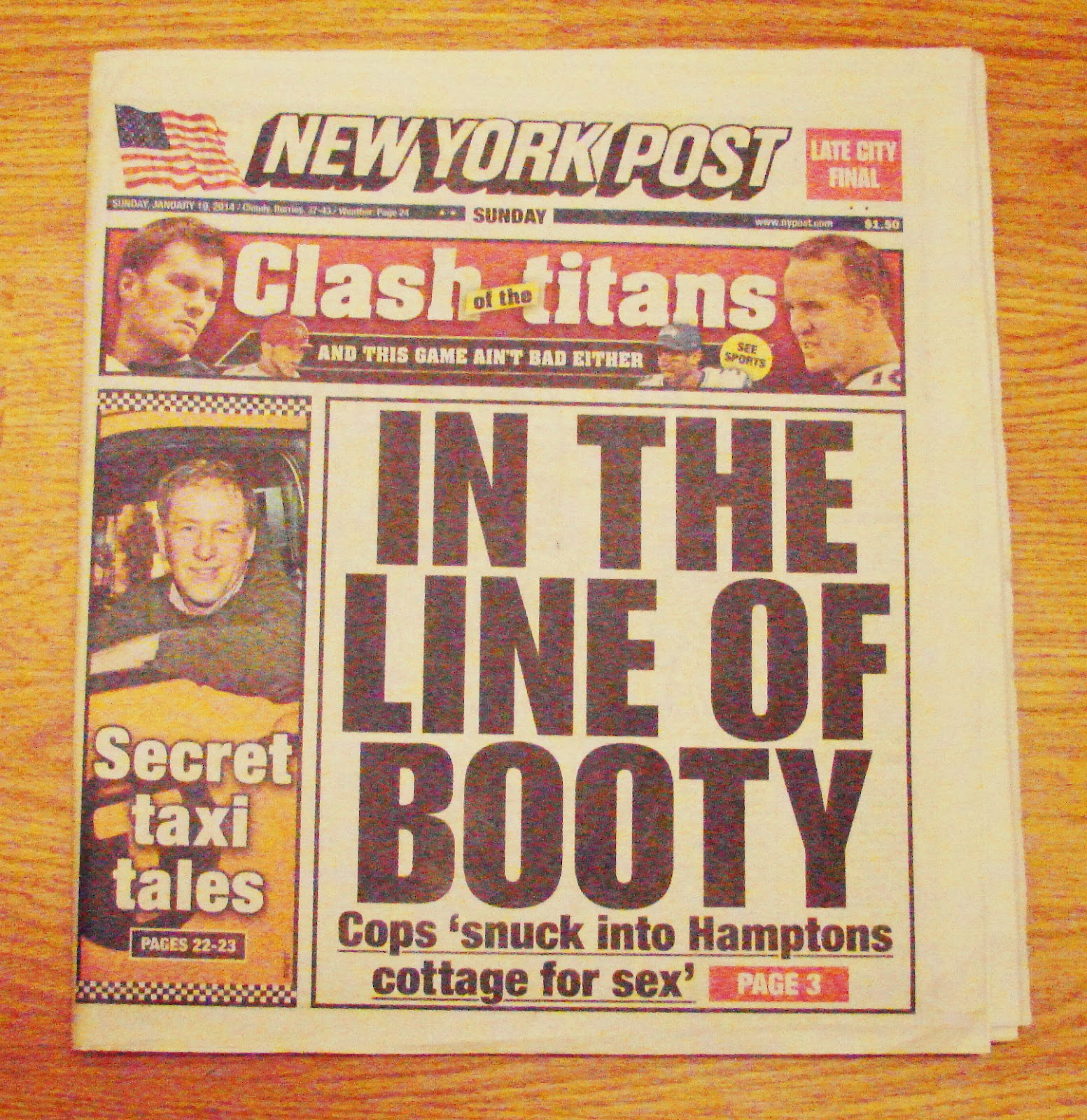 To my (and everyone else's) astonishment, the New York Post, in addition to a two-page spread in the January 19th Sunday paper, put a lead-in to the article, with my picture on Page One!

I am now one of very few people in this world who can claim to have had his picture published on the first page of the New York Post without being either a terrorist, a murderer, a politician, Lindsay Lohan, or dead. Plus I took advantage of the very rare opportunity, while purchasing several copies at a local deli, of holding the paper up to the fellow behind the counter and asking, "Does this guy look familiar?" One must seize upon opportunity when it is offered.

The article was written by Susannah Cahalan, the best-selling author of one of the most riveting books I've ever read, Brain On Fire which I recommend to you heartily. My thanks to Ms. Cahalan, to Sunday news editor Paul McPolin, and to night desk editor Mike Hechtman.

Click here for the online version of the article.

Having now acquired a taste for the Page One Experience, or perhaps just being on a hot streak, the mass circulation free morning newspaper, Metro New York, ran an article about the book on Monday, Jan. 20, and put the story, with a picture of moi, on... Page One!

And then, on Thursday, Jan. 23, the other mass circulation free morning paper, AM New York, ran yet another article on, uh... Page One!

Click here for that, if you can stand even more self-aggrandizement.