The Car On East 86th Street

You may have heard that we had a blizzard in New York City on December 26th. They say it was in the vicinity of 20 inches and was the 6th largest snowstorm ever recorded here, but I don't know if it was really that big. It was certainly a huge storm, but men in general and weathermen in particular tend to exaggerate when it comes to inches.

In any case, the story here wasn't so much the storm itself as it was the failure of those in charge to clean it up. In New York the snow removal is done by the Sanitation Department. The army of sanitation workers, who are normally removing trash, become the people plowing and salting the streets. It's a highly organized, military-style operation when it's done correctly. The city streets are designated primary, secondary, and tertiary in importance and are attacked in that order. In Manhattan, this means the highways, avenues, and major cross-town streets are cleared first.
Taxi drivers need to be extremely aware of predictions of snowstorms, as the potential for disaster is everywhere even in relatively minor events. Unfortunately, most of us learn this the hard way. I was initiated by ice myself one night in 1981. We were in the beginning of a medium-sized storm and I was driving a Checker cab which had a two-way radio in it for business purposes (no longer allowed in yellow cabs). A call for a lucrative out-of-town ride kept coming through and no one would take it. Eventually the dispatcher was sounding desperate and I hesitatingly agreed to do the job, taking an executive from "Black Rock", the CBS headquarters on 6th Avenue, to his home in Darien, Connecticut. Although the snow was steadily falling, I had no problem getting the fellow to his residence. But a couple of minutes after dropping him off I skidded into a snow drift as I came down a hill and got completely stuck there. The Checkers (like the Ford Crown Victorias we drive today) had rear-wheel drive and thus had terrible traction in the snow. These were the days before cell phones, of course, and I was on a back road at midnight with no civilization in sight, so I was truly stuck and quite upset with Checkers, the weather, God, and especially myself for having taken the job against my better judgement in the first place. Luckily, a couple of very nice people in a four-wheel drive Jeep eventually came along and towed me out of there, even tagging along behind me to make sure I made it back to the highway safely. Lesson learned, and here it is. (New York taxi drivers, take note.)
1. If possible, don't drive at all during a real snow storm (more than three inches). Your chances of having an accident are enormously greater than normal and you won't make decent money, anyway, because the weather will slow you down to less than half speed and there isn't much business on the streets. People tend to stay indoors while the snow is coming down.
2. Wait a few hours until after the snow has stopped falling before venturing out. If the Sanitation Department is on the ball, the primary roads will be plowed and salted by that time.
3. For 24 hours after a major storm, ride with your "off-duty" light on and your doors locked. Ascertain that a passenger isn't leaving Manhattan before you allow him into your cab. The reason for this is that however bad the secondary and tertiary streets may be in Manhattan, they're much, much worse in the outer boroughs. Plus it will take you forever to get back to Manhattan (without a passenger) if you make it back at all. 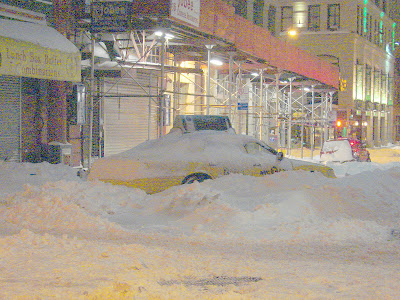 4. Use the avenues and major cross-town streets as much as possible while driving in Manhattan. If a passenger's destination is on a street that hasn't been properly plowed, ask if it would be all right if you could drop them off on the corner (unless the passenger is disabled in any way).
Following my own rules, I called my garage when the storm was just beginning and told the dispatcher I would not be coming in, even though it was a Sunday, normally one of my driving days. He said that was okay, a fortunate response because the owner of the garage (my boss) might have instructed him to tell any driver who didn't come in that he'd have to pay for the shift even if he didn't work it. That's the way it's been since the recession started in '08 and garages have been overflowing with drivers, some of whom are turned away because there are no cabs for them. This surplus of drivers is a new thing in New York, by the way. In all my years in this business, there had never been a time when there were enough drivers for all the cabs. Until now.
Anyway, I agreed to drive the Monday night shift. It was seemingly a good strategy because the snow, as predicted, stopped falling on Monday morning and that gave the Sanitation Department over six hours to salt and plow the primary streets before my shift would begin at 5:00. That should be enough time, right?
Wrong!
I was alarmed when emerging from the subway to see major Manhattan avenues unsalted and snow-covered - not good! Walking a few blocks to my garage, I stared in astonished dismay at a bus that had been abandoned and was left completely blocking an intersection. It was an eerie sight I had never seen before and looked more like post-disaster than post-snowstorm.
I entered my garage where employees were coping with the chaos that blizzards create in the taxi world. I was given the keys to a cab and told it was "ready to go", meaning it wasn't stuck in a snow drift. An hour later, after clearing the cab and freeing it from the drift it wasn't in, I pulled out into the slippery night, wondering if what I'd seen between the subway stop and my garage had been an aberration.
It had not been. Manhattan was a mess. The avenues and major cross-town streets such as Houston and Canal had been plowed perhaps once before the snow had stopped falling and then were newly covered with a few more inches, enough to keep the top speed of vehicles at around ten miles per hour. Even Times Square was a slippery adventure at 8 p.m. And that's how things remained throughout the night. It wasn't until 2 a.m. that I finally saw some salters and plows on a few of the avenues. And the abandoned bus that I'd seen on my way to the garage was not alone - I encountered at least half a dozen more during the course of my shift. 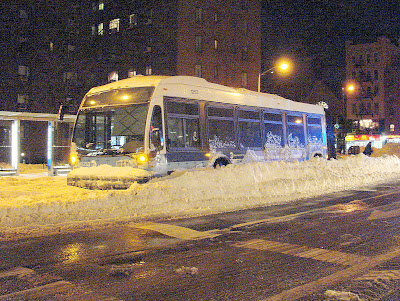 As the night wore on, veterans of New York snowstorms such as myself and many of my passengers realized something was amiss and we began speculating through our anger as to what the hell was going on. This storm had not been a surprise. It had been forecast accurately more than a day before it arrived. Where was the Sanitation Department? Suspicion began to grow that this may not have been merely incompetence but may have been a union tactic against management - the conspiracy theory! The mayor, who is still trying to master the art of speaking from both sides of his mouth, at first was making excuses, saying that we'd "never seen a storm like this". (Oh, really? I have.) Then, noticing the rising tide of outrage, he started putting heads on pikes. Investigations have since been initiated by the City Council and even prosecutors, so we may someday get to the bottom of it.
But be that as it may, I realized in retrospect that, like many inconveniences and minor disasters, something of value had been inadvertently created by the mess. It was something I'd seen during the night but which took me until the next day to comprehend that it potentially had the stuff of legend about it. Something symbolic. Something that could stand as a metaphor for the angst of urban living.
It was the car on East 86th Street.
At 10 p.m. I picked up a woman at 86th and Amsterdam on the Upper West Side who wanted to go straight across the Central Park transverse to 91st Street and 1st Avenue on the Upper East Side. Our route would take us all the way across town on 86th, a major, four-lane cross-street that runs in both directions (in other words, it's not one-way, like most streets in Manhattan). It was this woman who told me about "the car". Apparently this vehicle had achieved instant infamy in the neighborhood.
She said that not too long after the snow had started coming down heavily during the previous night, at around 7 p.m., a car had been abandoned right in the middle of 86th Street between 2nd and 3rd Avenues. Not double-parked. Not pushed off to the side. Just sitting there in the middle of 86th Street. She, like I, had seen many big snowstorms in New York City, but she could not recall ever seeing a car just sitting there in the middle of a major crosstown street. Neither could I.

She went on to tell me that earlier in the evening she had taken a bus across town to the West Side, where I'd picked her up. The route of this bus went along 86th Street, but had encountered a problem in transit. It couldn't make its way around this abandoned car - which was still there eight hours after the snow had stopped falling - nor could any of the other buses on the 86th Street route.

Solution? Take a detour. All day long and into the night the buses that normally go straight across 86th had instead been making a left turn onto 2nd Avenue, going down to 79th Street (the next major cross-street), and then coming back uptown to 86th on 3rd Avenue in order to avoid "the car".

Slip-sliding along 86th Street, we wondered when we got over to the East Side if "the car" would still be there between 2nd and 3rd Avenues. Actually I was hoping it would be, as I wanted to witness the spectacle for myself.

We had a mutual lamentation about the absurdity of it. How many individuals and city agencies had dropped the ball here? First, of course, the person who had walked away from his own car and had not come back to get it out of there, even many hours after the snow had stopped falling. Second, the people in the area who assumingly could have at least helped him push the car off to the side. Third, whatever towing service the owner of the car could not get help from. Fourth, the Traffic Department which normally will tow your car away if it is twenty seconds beyond the time posted on the "no parking" sign. Fifth, the Police Department, which has tow trucks of its own. And sixth, the Transit Authority which we can assume was too busy trying to get their own buses out of the snow to do anything about a car that was blocking one of its routes.

There was, however, one city agency which had not dropped the ball.

For surrounding "the car" on both sides were piles of snow which had been deposited there by the plows attached to city garbage trucks, thus creating an impassable island in the middle of 86th Street.