Stranger In A Strange Land

I was driving down Columbus Avenue on the west side of Manhattan a couple of Sundays ago at 2 a.m., doing what I am often doing at that time of the night - looking for my next fare. Columbus is a one-way avenue with synchronized lights that move like a wave, and the best way of getting that hoped-for passenger is by riding the front of the wave, much like a surf boarder. This gives you the best chance of being the first cabbie to get to someone who may be looking for your services somewhere down the road.
It's a routine thing for me, something I've been doing for so long I could probably do it blindfolded, just based on the timing of the lights that becomes internalized as years go by. But as I approached 79th Street, something not at all routine occurred quite suddenly. A pedestrian was crossing against the light, from the west side of Columbus to the east, causing me to slow down a bit to avoid hitting him. There's nothing unusual about that, of course. Pedestrians are known to be reckless in New York City. What was unusual was who this pedestrian was.
It was a coyote.
I think that's worth repeating: I braked for a coyote crossing Columbus Avenue!
Now, if you have ever been to New York City or if you live here, you know without need of further explanation how impossible that is. But in case you've never visited the Big Apple, let me tell you that Manhattan is an island upon which Man has evicted all but a few select members of the animal kingdom (pigeons, sparrows, chipmunks, rats, mice, a few raccoons, and a hawk or two) and created a world of skyscrapers, subways, and coffee shops that is meant for HUMANS ONLY. So the sudden appearance of a coyote on Columbus Avenue is almost as unheard of as would be the sudden appearance of an elephant or a camel on East 34th Street (which I have also seen, by the way, but they were a part of the annual parade of circus animals en route to Madison Square Garden, so it doesn't count).
The coyote moved just quickly enough to avoid the oncoming vehicles, as many humans do, and stopped on the sidewalk at 79th Street. Realizing I was witnessing an extraordinary event, I brought the cab to a halt, as all the other vehicles proceeded down the avenue without me. For about ten seconds, separated by not more than thirty feet, we checked each other out. I had thought that perhaps it was a dog, but as he turned to face me I could see that, although they were quite similar, this was not a member of that group known as "man's best friend". It had a wolfish face and an independence in its bearing that was not like that of a domesticated animal. It was definitely a coyote.
My immediate thought was to get his picture. I carry a camera with me at all times that sits beside me on the front seat and I grabbed it. But, as often happens in street photography, by the time I had the power on and had brought the viewfinder up to my eye, my subject had moved away, trotting into a four-block-long park that surrounds the back of the American Museum of Natural History. He was gone.
Nevertheless, I knew I still had a great photo opportunity on my hands, so I pulled the cab over to the curb, took camera in hand, and walked into the park at 79th Street in pursuit. The coyote had gone north, toward the park's 81st Street boundary, and I caught sight of him again from a distance of about one block. There then began a fascinating game of cat and mouse (so to speak) between the two of us.
Envision this scene, if you will: just myself and this animal in a snow-covered park at two in the morning, with no pedestrians on the streets and the only sounds to be heard coming from the occasional rumblings of automobiles moving down Columbus Avenue. The stillness, silence, cold air, and light from a full moon evoked an appropriate feeling of actually being in the wilderness. I could tell that the coyote had caught sight of me and was aware that I was following him. Whenever I moved, he moved. When I stopped, he stopped. And, as if to frustrate me, whenever I was about to snap a picture, he would move again.
Even so, I was able to take a few pictures. I shot a distance of about a hundred yards with a hefty zoom lens, but with the darkness and the unwillingness of my subject to stand still, I must admit these pictures are not very clear. Here's what I came away with... 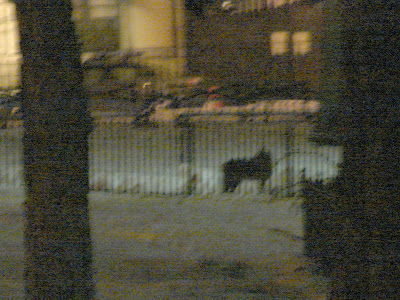 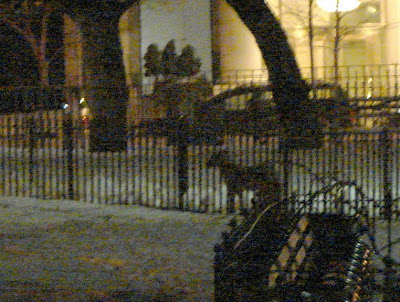 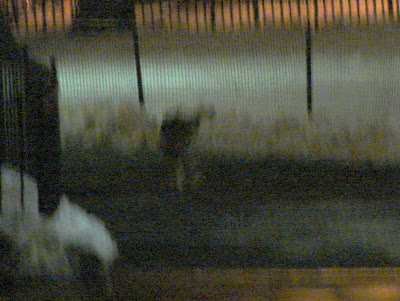 I spent about ten minutes in the park with the coyote until he finally exited near 81st Street, went back out on Columbus Avenue, and lost me. I circled the area a couple of times in the cab, but couldn't spot him again. I pulled over to the curb to check how my pictures had come out and had a few reflections about the experience. First, how completely odd and curious it was that, of all the locations he could wander into, he chose the grounds of the Museum of Natural History. It was as if he was seeking sanctuary in the one place that humans have set aside for the study and understanding of nature and its creatures.

Next, how astonishing it was for a shift of taxi driving to be interrupted by a wildlife adventure in the middle of Manhattan. That is surreal.

And finally, I found myself empathizing with the plight of the coyote. He had somehow wandered away from his natural habitat and found himself a stranger in a very strange land. It's a feeling I've often had in my own life.

I wondered if I should call the police and report the sighting. but I decided against it because of a previous occurrence. A few years ago there had been another coyote in Manhattan and, amazingly, I saw that one, too, walking alongside the wall that adjoins Central Park on 5th Avenue one night at 3 a.m. The next day it was on the news that the cops had been chasing the poor animal around Central Park all day and finally were able to capture it and turn it over to the wildlife service. Unfortunately, two weeks later it died in captivity. I really didn't want that to happen to this one, so I didn't call the police and wasn't even going to write this post about it unless the media reported its presence, which they did a couple of days later. It was reported that a coyote had been sighted in Chelsea and was being pursued by the police around the West Side Highway, but had slipped away. No one knew how it got into Manhattan, but speculation was that it might have wandered south through Westchester County and come across the river on railroad tracks.

To this point the coyote hasn't been seen again.

I hope he made it back home.

********
And when he got there, it would be great if he clicked here for Pictures From A Taxi.
Posted by Eugene Salomon at 11:55 PM 7 comments: Links to this post