One Thug Too Many

One way of looking at New York City is to see it as an endless battle for turf. Everyone has, or wants, their own little piece of the island. And once that is won, it must be defended.

When this comes down to the level of a taxi driver it means his turf is either the area of the street that he has control over as he cruises down the avenue in search of his next passenger, or it is the place he holds in a line of cabs in front of a club. And it is from this position in space that he may have to deal with the doorman of that club who has also staked out his own little plot of real estate - the area in front of his club - as his castle.
The doormen who work at hotels and luxury high-rise apartment buildings have never been trouble for me, but I have had many squabbles with the doormen at clubs. For one thing, they are not full-time employees and don't look at their job as being their careers. Usually they're big, menacing-looking muscles who operate on the thug wave-length.
Now, I don't care if they want to be thugs with people on the sidewalk who may want to enter their sacred temple. It's when they assume that they have some kind of authority over my space - the street itself - that we have a problem. I mean, if anyone owns the street, it's me.
So this is what happened a couple of weeks ago...
It was a particularly dead night which drove me to the desperate measure of waiting in front of this Manhattan strip club in the first place. If there'd been any business on the streets, I'd have been out there racing with my fellow cabbies. But when one goes half an hour, then forty-five minutes, and then a full hour without a fare, one begins to question the wisdom of spinning one's wheels and emptying one's gas tank.
So I pulled up in front of this place at 3 a.m. Even so, I wouldn't have decided to wait there had there been any other cabs in front of me on a line. But there weren't any cabs already there, so I just pulled up and double-parked outside the entrance.
Immediately the doorman caught my eye. This guy: 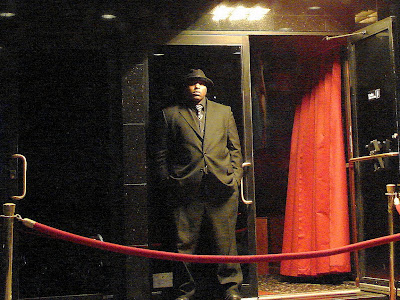 I kind of liked the way he was dressed for the part and I also thought he had the demeanor of the quintessential thuggy doorman, so I decided to take his picture for my photography blog (http://picturesfromataxi.blogspot.com/). But I instinctively knew he wouldn't like it if he saw me pointing my camera toward him, so I decided to be sneaky about it. I aimed the camera at him through the opened driver's-side window and took the shot while I faced forward.
This turned out to be a mistake. He noticed what I was doing.
Now, I take pictures of lots of people. They usually don't know that their picture is being taken but even when they do I normally get a slightly confused or surprised look in response, not hostility. But this guy took it as an invasion of his territorial rights. He immediately gave me his most intimidating death-gaze and snarled at me.
"Get out of here!" he yelled out at me from his command post.
I could understand his resentment of my sneaky method of stealing his image. I suppose I could have asked him if he would mind if I took a shot of him, but I'd thought what I did was the more expedient way of going about it. I just didn't think I'd get caught. Nevertheless, I didn't see this as being any big deal. He could have taken it as a compliment that I'd want to take his picture in the first place. And now he was telling me to move off of my turf. Like hell.
I didn't move.
"Beat it!" he repeated.
I looked right at him. "What, do you own the street?" I shot back.
In a situation like this, the doorman actually does have the upper hand because he can convince the people coming out of his club that I am some kind of pariah taxi driver and that they'd better not get in my cab. And the people coming out his club will usually do as he says. That may not be fair, but that's what I would expect to happen. Still, there's a principle involved here. And that is that a doorman has no authority over where a taxi driver decides to plant his cab. He works for a private company that is situated on a public commodity known as a street. If a doorman wants a taxi driver to move, he can make it a polite request which the taxi driver may or may not grant him. It's the street!
So, even though I knew I was playing a losing game, I held my ground.
I expected the doorman to come over to me and try to be even more intimidating. But instead, it turned out he had his own, even scarier-looking, thug to do his dirty work for him. This guy, whom I hadn't noticed before: 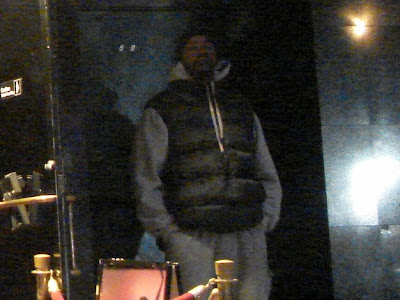 Thug Number Two walked up to the side of the cab and made this proclamation: "Get outta here!"
Although reason might have dictated that I take his advice, I still didn't feel the inner motivation necessary for me to actually go away. I stood my ground.
"What's the problem?" I asked in a civil tone.
"No pictures!" he grunted.
"I take pictures of everybody, friend," I said, trying to get him to see that I was actually some kind of street artist and not a heavy from a rival gang who was staking out the place.
"You ain't my friend," said he, "get lost!"
"I'll leave when I feel like it," I replied.
He looked at me with I think a little surprise that his attempt at intimidation wasn't working, perhaps fearing that he was losing his touch. He walked back to the club while I damn well continued to hold my position in space, even though I knew I'd never get a passenger from this place. Thug Number Two then opened the door of the club and stuck his head inside for a moment.
Out came Thug Number Three.
He was a burly white guy dressed in a suit (sorry, no picture). And I knew instantly that this guy was trouble because I'd had a minor encounter with him about a year ago. It wasn't that he was any tougher in a physical sense than the other two. It was that I knew he was an off-duty cop who works at the club as a bouncer.
So I quickly weighed my options. I could stand my ground and hold to the principle that this land is my land and I have as much right to it as you do.
Or I could pick up the pieces of my smashed camera after it hits the pavement and calling the police for assistance would not be a viable option.
I decided to heed the advice of the first two gentlemen I'd encountered and seek to earn my living in a different location.
It was just one thug too many.
Posted by Eugene Salomon at 11:58 PM 3 comments: Links to this post