BBC Breakfast and the Art of the Plug

I got a lesson during the course of a single shift last week that is something any guest on a talk show must learn when he's trying to "sell" something. And that is, when you're being interviewed you've got find a way to get in the plug. It turns out to be something of an art. Here's what happened...

It began with a prearranged meeting at 6 p.m. with a couple of Australian journalists in front of the CBS Broadcast Center on West 57th Street. They had contacted me a few days prior with a request for an interview with a "real New York cabbie" about the election results. It was to be on a radio station known as 3AW in Melbourne with a talk-show host named Neil Mitchell, the most popular talk radio guy in those parts, I was told, with an audience of a million people.

So off I went at the very beginning of my shift to the CBS building and there I met my two Aussie contact fellows, Justin and Sebastian, who climbed into my cab. We chatted for a few minutes and then I was handed a cell phone. On the other end was what might be called a Professional Voice. Do you know how someone sounds who speaks for a living? It's smooth and kind of resonant without the "umms" and "uhhs" that punctuate the sentences of non-professionals. It was Neil Mitchell, and we were on the air in Melbourne.

I was asked a few questions about the election and about taxi driving in New York. I thought I answered them adequately and then, after less than a minute - zip - it was over. I had another five minutes of conversation with Justin and Sebastian and then - zip - they were off to attend to other matters and were gone. I drove down the street, picked up my first fare of the night, and the rest of my shift was underway.

But as I headed toward the East Side with my passenger, something didn't seem quite right. They had told me that I had just communicated to a million people and yet it felt like nothing. There had been no feedback. I mean, when you communicate the idea is that there's someone on the other end to receive it and an effect is created, right? Here there was just a vacuum, and it was unsatisfying. And worse than that, I had intended to mention the name of my blog on the air but the thing went by so quickly that the opportunity had slipped right past me. So I felt a bit frustrated, as well.

However, I took it as a learning experience - practice, really - because I knew there would be an even bigger fish to fry that very night. Just before I'd left my house to drive into Manhattan I had received an email from a contact person from the BBC asking me if I'd be interested in appearing on one of their shows, BBC Breakfast, at 3 a.m. They also were interested in interviewing a real New York cabbie to get a local reaction to the election, and I had called the number they'd given me and accepted the invitation.

Now you have to understand, I am not a movie star nor a head of state. I am merely a New York cab driver. I am not used to receiving one - much less two - invitations to go on the air in the very same night. So my mood was elevated and this helped me to have a better than usual night as a member of my own profession, culminating in a lucrative out-of-town job to Ridgewood, New Jersey, that on any other night would have been the highlight of the evening.

In fact it was during the return ride to the city from Jersey, just as I was crossing the George Washington Bridge, that I received a phone call from Emily, the charming producer of the show, who asked me to bring my cab right up to the site from which the show would be broadcast, the Skylight Diner at the corner of 34th Street and 9th Avenue. The plan was that I would be interviewed while sitting in the taxi. In speaking to Emily, I found out a bit more about BBC Breakfast. It turns out to be Britain's primary early morning show on the "telly". It's on the air every day for three hours and has an audience all over the U.K. of - gasp - FIVE MILLION PEOPLE. 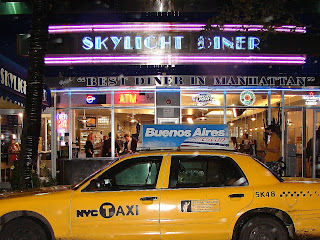 Somehow the concept of five million viewers in the U.K. was much more intimidating than one million listeners in Australia, which I took in stride. I did the math - I get about 50 people a day in my cab. I would have to drive 100,000 shifts to reach five million. And it would take me 274 years to do it if I drove every day of the year.

But it was the next part that really got to me:

Suddenly it occurred to me that a live mike equals power. I could say whatever I wanted and it would be heard by all these people, imagine that. I started to think of interesting things to say...

"The Revolution is here. I am your leader."

"All of you children watching, go to Mum's pocketbook right now and send the money to ______ (my address)."

"You have been abducted by aliens but when I say the words 'fidgity-doo' you will remember none of it. Fidgity-doo."

Of course, I said none of these things. What happened was I arrived at the diner at 3 a.m. and was greeted by Emily. It was an interesting sight, actually, to see this 24-hour diner with so much activity going on at that time of night. The streets in that area are quite deserted at 3 in the morning, yet here was this hub of busy-ness with the ability to transmit images and sound to the other side of the planet. I know we take this technology for granted now but, really, that is incredible if you think about it. 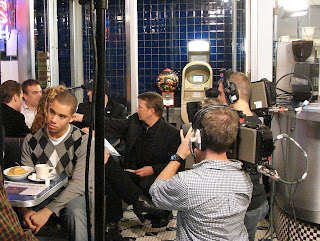 Emily briefed me on what was to happen which was that in about half an hour the show's host (or "presenter", as he is called) Bill Turnbull, would come out to the sidewalk, approach me in the cab, and ask me a few questions. That was all the preparation I had. So for the next 30 minutes I hung around the diner watching how the show is done while other guests were interviewed, and then, at the appointed time, I went into my cab. Out came Bill Turnbull - lights, camera, action - and the interview was underway.

He asked me a few questions about the city's reaction to the election, what's on people's minds, 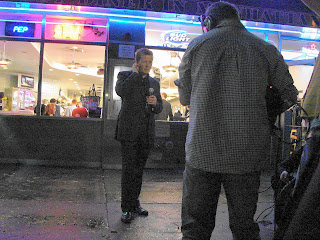 and about being a taxi driver in New York, and was about to wrap up our little chat when I realized the moment of truth was at hand. If I was going to let five million people know the name of my blog I was going to have to act boldly.

Even though he hadn't asked me, I acted as if he had and shamelessly let the plug drop. "The job is so adventurous," said I, "that I started writing an online blog called 'Cabs Are For Kissing'."

And then, bless his heart, Bill Turnbull picked right up on that and repeated the name of the blog for all to hear again.

The result: over 3,000 hits and more than 50 comments and emails from all over Britain. And that is a great, great feeling to know that an individual can create what is essentially a personal magazine from his own home and have that kind of reach around the world. Mind boggling, really.

And so I'd like to thank everyone who took the trouble to find me here. Welcome aboard! Please come by often, and I'll try to keep it interesting for you.

********
And if that's not enough and you want even more New York, just click right here for Pictures From A Taxi.
Posted by Eugene Salomon at 1:47 AM

Hi, I saw your interview on BBC Breakfast, and subsequently visited your blog (I have subscribed to RSS feed so as not to miss it in future). I drive a cab in Swansea, South Wales ; not much is different really, except for location. Keep up the good work.

Yeah me too - saw you on the telly . I like Blogs, and I love New York, so it made sense to pop you into my RSS reader. Looking forward to reading more.

PS can you say this phrase for me: My daughter bought me a hot dog.
That's what I love about New Yawk!

You've obviously appealed to the Welsh, I'm from South Wales too! Yes BBC Breakfast and Bill Turnbull are great and led me here. Love the blog, keep writing!

Okay, here goes... my dawter bawt me a hot dawg. And den I had some cawfee.

Gene, I'm green wth envy. The most anybody ever did with my cab was use it in a movie. It was the diplomat in the picture.

Once when I crossed the state line in to California in a semi, the guy at the chicken coop is looking over my paperwork, looks up and asks me to say Wisconsin. So I did. Then he looks up and says with great exageration, "Wiss-kahnn-sinn" Then he broke out laughing, gave me back my papers, and waved me into California.

hey Gene I'm still really gutted i missed you on the beeb! but i work Breakfast so that figures... one thing tho - any PR man/woman worth his salt will tell you their show is THE most popular! : ) i'm gonna keep searching online for that clip! take care

Hi Gene,
Thats one problem with the blog you don't know if anyone is really listening as you get no feedback.

My last post was about stopping the blog as no one was commenting, well a few posted that they did read it.
I an taking a rest anyway.

Look after yourself hope to look you up the next time when I get back to NY and I will pay you to bring me over to see Houdinis grave.

By contrast I've been reading here for a while.

Your post made me think, "gee, if I gave out my site's name in a plug opportunity scenario, would it be found?"

...and you didn't mail me to let know you were broadcasting to my country!

How you doing now that you are a super star??