A Lab, A Mortician, And A Gorbachev

Some recent "fares of the night"...

Sunday, April 6, 10:20 pm - My long dog-less streak finally ended with the arrival of Jake, a Golden Lab, and Mitchell, his buddy, who traveled from 14th and 8th in Chelsea down to Battery Park City in Lower Manhattan. It had been so long since I'd had a dog in my cab - not one since November - that I was beginning to think my taxi had been entered onto some kind of canine blacklist. Why were the dogs avoiding me? Didn't seem fair, especially considering the great publicity I've been giving them. Maybe it's just that people don't bring their dogs outside as much in the cold weather as they do in the warm - a law of averages thing. But now that it's springtime, c'mon dogs, no excuses - you've got my scent.
Anyway, Mitchell tells me that Jake is 11 years old and is a great companion. He and Jake hooked up when a former girlfriend wanted a dog. But when that relationship ended, Mitchell's bond to Jake was stronger than the girlfriend's, so it's been the two of them ever since. 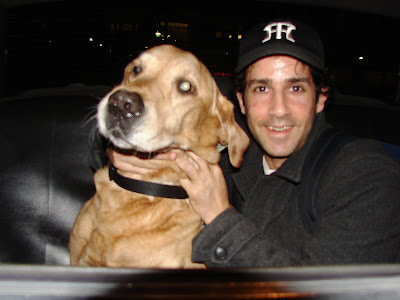 Monday, April 14, 2:00 am - it sometimes happens in a conversation that person A is just dying to tell person B something that will really impress person B, really create the BIG EFFECT, and the slightest provocation will be reason enough for person A to suddenly detour the conversation in the direction of the shocking revelation. It was like that on a late night ride I had way out to Fresh Meadows in Queens with a 30 year-old woman who, as we headed into the Queens Midtown Tunnel, responded to my comment that the congestion tax was "dead" by saying that she is studying to be a mortician.

The story from my passenger was that she'd been studying to become a forensic psychologist - that's someone who counsels criminals - but realized as she was nearing the completion of her schooling that the idea of listening to people tell her about the horrible crimes they'd committed was utterly reprehensible to her and she'd be miserable doing it. She decided she preferred to work with dead people (she actually said this) and began a course of education leading her into that field.

So how do you become a mortician? First you have to go to a college that has a mortuary science department and get a bachelor's degree. And then you have to do an internship in real funeral parlors.

"What do you have to do to finish the internship?" I asked.

"You've got to do forty cadavers," my passenger replied.

Looking at her in the rear view mirror - she had shoulder-length, straight black hair and a pale complexion - the squeamish thought crossed my mind that this is the last person to get her hands on you, the last person to touch you, yet this was a person you would never see. I found myself waxing poetic on her, equating her in my mind to an angel who helps prepare the soul for its journey into the next life. But this balloon fizzled when the conversation turned to the business of undertaking.

"What do you think of cremation?" I inquired.

"Not much," she replied with a scowl.

I knew what she meant. I feel the same way about pedestrians.

Tuesday, April 15th, 1:06 am - like the mortician, this passenger was a person who needed only the slightest prompting to suddenly tell me all about who he was. I picked him up on 52nd and 8th and, as we were driving uptown on Central Park West toward his 95th Street apartment, I mentioned that I sometimes see racoons crossing CPW late at night. For some reason this was all he needed to inform me, in a Russian accent, of two vital pieces of information:

a) that he was an accomplished artist, and

b) that he was Mikhail Gorbachev's nephew.

His name was Yuri Gorbachev and with his exuberance in telling me about his art, his uncle, and his affilitation with Absolut vodka, I think it would be fair to say Mr. Gorbachev could be described as the opposite of an introvert. He could also be described as a good sport as he playfully agreed to pose for this photograph: 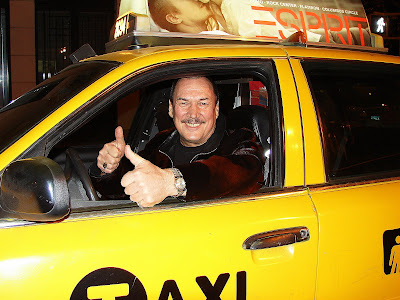 And as long as you're in a clicking mood, why not put your index finger to good use by clicking here for Pictures From A Taxi?