Hear ye, hear ye, I will be appearing in a documentary program called Super Systems, which will make its first broadcast this Sunday, Dec. 11th, at 8:00 pm Eastern Time here in the U.S. It's part of a series about how certain successful "systems" work, in this case the system of taxicabs in New York City.

I was located via this blog by the production company doing the show back in September. We spent a few days taping interviews, in and out of taxicabs, about my experiences as a taxi driver and my opinions about the taxi industry. It was a nice validation and I was told I did well in the edits and am included in a sizable portion of the show. So please check it out if this sounds of interest and, I should add, if you can. There is kind of a catch here, at least at this time, which is that the show is in 3D!

Back in February Sony, I Max, and the Discovery Channel launched a new network called 3Net which is meant to be viewed on televisions that are equipped for 3D viewing. It's a thing of the future kind of thing. If you go to this website, http://www.3net.com/show/23/supersystems/category/6,
you can learn about the channel and find out how to find it in your area. Super Systems may also be able to be seen on regular tvs sometime in the future, I am told, perhaps on the Discovery Channel, but for now it's only available on 3Net. In the New York area the cable service which carries the 3Net station is Directv.

Here I am soaking in a bit of my fifteen minutes... 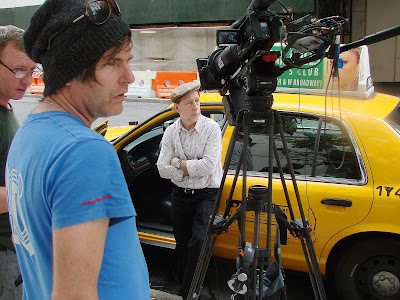