The guy got in at three a.m. wearing a Wo Hop t-shirt. This was interesting because who would have thought that Wo Hop, my favorite all-night Chinese joint on Mott Street, would ever be the kind of place to have a logo on an article of clothing? And what kind of person would boastfully display it on his chest, as if to say, "You want dumplings? My Wo Hop dumplings will scrub the floor with your stinkin' Golden Monkey dumplings. You got that, lucky boy?"

So it had to be properly acknowledged.

"A Wo Hop t-shirt! Wow, you don't see many of those!" I exclaimed before he could tell me he wanted to go to Astoria.

"Yeah, man, Wo Hop rules," he replied with a happy-face smile and a certain half-here, half-there demeanor that told me immediately that he was a jolly drunk who was ready to expound. This would be a fun ride.

"I love that place," I continued. "For one thing, its location. You drive down Mott and there's that dog-leg to the left and late at night the street is as slippery as ice from the fucking garbage truck spillover and it looks kind of creepy like a scene from a Bogart movie at four in the morning, it's so dark and deserted, but look, wow, Wo Hop is open."

The guy was right on it. "Yeah," he joined in, "you do down those stairs and there'll be, like, five Asian guys sitting there looking at you like what the hell are you doin' here?"

"No doubt! No doubt, and they keep lookin' at you like you're a cop and before you can sit down the tea kettle arrives and in like thirty seconds you've got your wonton and a minute later there are the egg rolls and the duck sauce."

"And the mustard sauce."

"Yeah, and the mustard, man, and then a minute after that the dumplings show up and you're in piggy heaven, man!"

"The dumplings - fried or steamed?"

Pavlov-like, I could feel my saliva glands kicking in. Damn, those dumplings are good and, as I steered the cab onto the Upper Level of the 59th Street Bridge, I started thinking maybe I should shoot down to Chinatown after I dropped the guy off. There are times when it's best to just give in to the dumpling urge. Mucho on the soy.

"Hey," I said to my passenger as a thought came to me, "have you ever ordered anything particularly freaky at Wo Hop? Don't they have some really weird stuff on the menu?"

He thought about it for a moment and smiled. "Oh, yeah, snails."

"Shit, yeah, I ate a bunch of them," he replied, still smiling.

"Oh, it was delicious, man. You stir it up with the rice. Really good, actually."

I had to admit that, since it wasn't an insect, I could see myself trying it someday. I draw a hard line in the sand when it comes to eating insects, though. I wouldn't get very far on The Fear Factor.

"What was the weirdest thing you ever ate?" I inquired. It was a logical question to ask at this point in the conversation.

A goofy smile came over his face. "I ate a tarantula once," he said.

I was stunned for a moment as my mind's computer tried to process this information. Did he just say "tarantula"? Yes, he did. Isn't "tarantula" a huge, hairy spider? Yes, it is. There isn't some chocolate bar or energy drink called "Tarantula", is there? No, there is not. So what he's saying is that he ate - that is, he put into his mouth, chewed, and swallowed - a huge, hairy spider? Uh, yes, that's what he's saying.

I looked at him again in the mirror. The goofy smile was still there.

"Uh huh," he confirmed, with a just perceptible trace of pride in his voice.

"Yeah, they fried it in some sauce."

"Isn't a tarantula poisonous? What about the fangs?"

"Yeah, they took that shit out before they cooked it."

"Right!" he said with a dumbass-me laugh.

"So how did it taste? Don't tell me it tasted like chicken."

"That's funny," I replied, Groucho Marx style, "cause I once ate a chicken that tasted just like a tarantula."

The joke went whizzing by his head and on into outer space without being noticed. After couple more minutes of tarantula talk, we arrived at his apartment house on 30th Avenue. He paid me the $12.30 fare and threw in a $2.70 tip - not bad for an insect-eater - and stepped out of the cab.

"I once ate a centipede, too," he called back as he started to walk off toward his building.

"Was that in Thailand as well?"

So the guy had the distinction of having eaten disgusting, multi-legged creatures on two different continents. He disappeared into his place and was gone and I turned the cab back toward Midtown, the urge to go to Chinatown having somehow suddenly left me.

The thought came to me back on the 59th Street Bridge that had this guy told me all this and had not been just a passenger in my cab but instead was, say, a friend or a coworker, I would always think of him, before I would think of anything else he might have done in his life, as the guy who had eaten a tarantula. Let's say he had once done something great, like spending two years of his life in the Peace Corps. I would think of him as the Peace Corps volunteer who had once eaten a tarantula. Or if he had once rushed into a burning building to save someone's life, he would be the guy who had rushed into a burning building who had once eaten a tarantula.

Sometimes it's just better not to know. 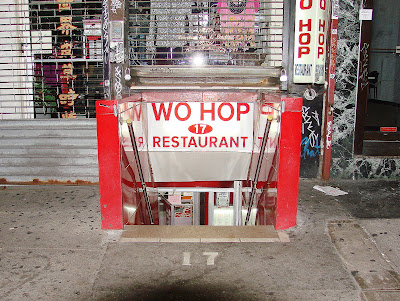 ********
But then again sometimes it is better to know. Like knowing that when you click here you'll suddenly find yourself at Pictures From A Taxi. And no one will try to talk you into eating a bug.
Posted by Eugene Salomon at 12:40 AM 3 comments: Links to this post