Feathers In My Bald Spot

One of the few, although truly great, perks of driving a cab in New York City is this: you are cruising down an avenue in search of your next fare when a silhouetted figure appears from about a block away with his arm in the air. As you approach this person - your next passenger - you think he seems familiar and in fact he looks very much like a certain very famous celebrity. Then you realize it is this celebrity. And he's all yours.

Yes, yes, I know, some people insist on being oh-so-very-nonchalant about celebrities. "They put their pants on one leg at a time like everybody else," they will say. And I would agree that just because a person is famous doesn't make him or her basically any different than anyone else. But come on. There is a big difference.

The difference is what is created by what I call the physics of mass communications. The phenomenon of vast numbers of people knowing who you are and having had the experience of being communicated to by you without having had the experience of communicating to you makes for an exotic category of human existence. It creates a vacuum that makes the recipient of all this communication want to communicate back to its source point if he should run into them and conversely it tends to create a feeling of withdrawal on the part of the celebrity who must go through life having strangers constantly approaching them.

All of this is to tell you that I had a big-time celebrity in my cab last week. This is a person who is so famous that almost everyone who has been to a movie theater in the last 30 years would know him. I don't go "ga-ga" over celebrities, but I won't pretend that it wasn't a big kick having him in my cab, either.

It was Robin Williams.

I was cruising down Columbus Avenue on Sunday evening at 6:30 pm and there he was with his arm up in the air at 62nd Street, all by himself, instantly recognizable. In the endless Wheel Of Fortune that brings passengers and taxi drivers together in New York City, it must have been my turn to get him, and I experienced that quick moment of excitement you get when you realize he's "yours".

I say that because having a celebrity in a taxicab situation is quite different than almost any other situation in which you might find yourself suddenly confronting a very famous person.

It means that you're about to be in a context in which having a conversation with this person would be perfectly normal. If you were to run into some big star while walking down the street, you might say hello to him, but you certainly wouldn't stop him in his tracks and expect to have a chat. And it would be the same in the great number of professional situations in which celebrities and mere mortals may have contact. The only exceptions I can think of off the top of my head, other than with taxi drivers, would be with bartenders or hairdressers.

So there he was, Robin Williams.

The first thing I'm going to say is that I'm happy to report that Robin Williams is capable of having a rational conversation with another human being. If you've ever seen him on a talk show, he usually goes on with his jokes and instant impersonations at such a speed that you'd think the guy had been born without an "off" button.

Actually - and not surprisingly - he was friendly, totally approachable, and quite conversational. His destination was downtown to Tribeca, a 20 minute ride, so we had some time to talk about lots of things, from his son, Zak, who had been in my cab 5 years ago, to the damned televisions that are now in the rear of NYC taxicabs, to his days doing stand-up for the people sitting in front of the Metropolitan Museum of Art, and other things. At one point I told him a joke. It went like this:

Q: What is the difference between Sarah Palin and Dick Cheney?

He hadn't heard it and he laughed. Now that was a win for me - Robin Williams laughed at my joke!

By the end of the ride the affinity between us was sufficient that I felt it wouldn't be inappropriate to ask him to pose for a picture in the cab. I told him it would be a feather in my cap, being that I had a blog and all. Robin pointed out that I wasn't wearing a cap. I realized he was right and said that well, then, it would be a feather in my bald spot, not bothering to mention that I didn't have a feather, either. Here's the shot: 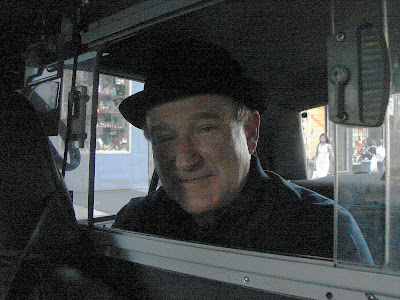 As he headed out the door, Robin reached forward, shook my hand, and told me he liked my "show" much better than what was on the television in the cab. That felt good.
Now here's another feather in my bald spot: I have had a photograph published in this week's edition of Time Out New York, the city's premiere entertainment magazine. Each week in a section called "Photo Finish" they publish a NYC photograph and then have an artist do a cartoon of what might have happened after the picture was taken. It's very funny and quite clever.
This is the shot they used (from my other blog, Pictures From A Taxi): 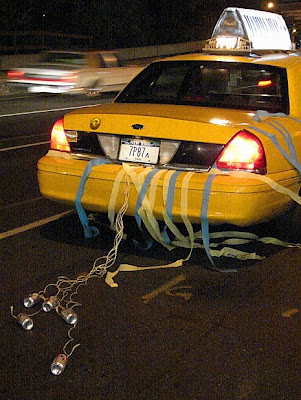 What had happened was a bride and groom had taken my cab from their reception to their hotel. Their friends decorated the cab just before they arrived at the taxi. In the artist's sequence, however, a man hails a cab and asks the driver to take him to the "O'Connor wedding". The cabbie says okay and pops open the trunk, which is where the party is taking place. Cute.
The magazine is available at any newstand in New York and will be there until Wednesday, Sept. 24th. So grab a copy if you're in the city and see it for yourself. It's on page 4.
You can check out what they do by clicking here, and then typing in "Photo Finish" in the search button at the top of the page. You won't see this week's edition, however, as it seems they wait several months to put what's in the magazine online. But this will give you an idea of what it's all about.
Posted by Eugene Salomon at 3:23 AM 11 comments: Links to this post

A Fun Evening With Farebeater

The taxidriver/improv event was a fun evening, as advertised.
I was interviewed onstage by the fellow who organized it, Timothy Cooper, and the Farebeater Players then used some of my material and some of their own to do improv and sketches all based on the situation of riding in a taxicab.
Some pics: 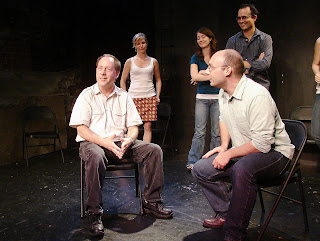 That's me on the left, withTimothy Cooper. 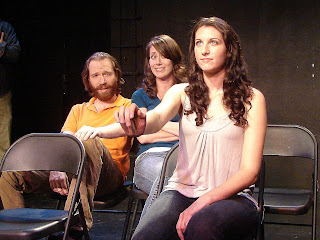 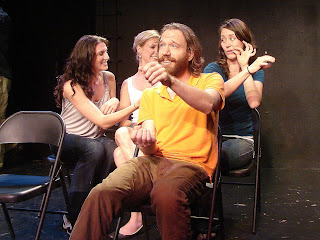 One of the perks for a male cabbie is being able to eavesdrop on female conversation. 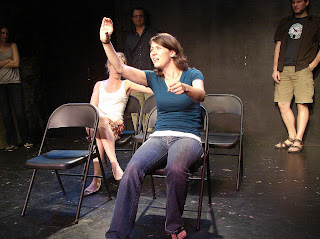 Very important to keep the mirror properly adjusted at all times.

Farebeater is a monthly event. To get info on upcoming shows, send an email to timothy.cooper@aya.yale.edu.

And while you're at your keypad, don't forget to click here for Pictures From A Taxi.

Posted by Eugene Salomon at 11:44 PM 5 comments: Links to this post