The No Sex Zone

I was waiting in the taxi line at Flashdancer's at 4 am recently when a young woman and a guy hurried out of the place and got into my cab. She wasn't one of the strippers - the girls who work there never get into cabs with customers - she was the girlfriend of this particular guy and they had just spent some together-time in the club. Their destination was the West Village, a two-mile trip from our Times Square starting point.

They immediately snuggled up close together and started laughing and were kind of pecking at each other, so I knew that these two were strictly into their own world and that this would be a non-conversational ride. That was all right with me because I'd already been driving for over ten hours and was hitting my post-4-am-wall, that mental/physical barrier which says that this will be the last ride of the night. So I just turned up the radio a bit and put my proverbial eyes on the road.

But before we'd gone ten blocks I noticed in the mirror an unmistakable shift in their positions. The girl had moved down in the seat and the guy was straight out on top of her. There was no question about it - they were about to start fucking. I drove for about another block and then actually surprised myself at my own reaction. I suddenly pulled over to the side of the street, right next to the Hard Rock Cafe, and stopped the taxi.

They had already straightened themselves up, and the guy started to say something in protest. But I cut him off before he could get a syllable out of his mouth.

The girl, who had one of those classic shit-eating smiles on her face, gave him a little shove and they both immediately exited the premises without any further words being exchanged.

I drove off a bit in a daze, wondering if I should look for another fare or just call it a night. As I moved down 7th Avenue, I found that my attention was stuck not on the fact that two people were about to have sex right there in the seat behind me - that has happened a number of times - it was on the way I had handled it. That had never happened before.

In the past I must admit I have always found the titillation factor to have outweighed the indignity factor. I have been more interested in voyeuristic aspect of this weird social situation than in keeping my own dignity intact by not allowing ill-mannered people to get away with pretending that I don't exist.

For several days I found myself mentally returning to the incident and wondering what had changed with me. And then it hit me like a slap in the face. Oh my god, I am over 50 years old and have gone through male menopause without even knowing it!

My fears were confirmed when I remembered what had happened about a week before I had had the two would-be fuckers in my taxi. I had picked up a young guy from this very same strip club and gotten into a lively discussion with him about breasts, something that was not hard to do considering he was coming from the Double D capital of the west side of town.

Why, I had beseeched him, did men almost uniformly have such an obsession with breasts, anyway? A breast is a gland for God's sake, right up there next to the thyroid and the pituitary. In fact, it's not even a part of the reproductive system. It really belongs to the digestive system, if you think about it. I mean, it secretes milk! What's the big deal?

Of course, he looked at me like I was out of my mind and said he didn't care if they belonged to the digestive system or the solar system - he just wanted to get his hands on as many of them as possible.

Now I realize the only reason I could even say such a thing to this perfectly normal guy is that I am on a steep slope that winds up in a nursing home. There I lie in my bed watching The O'Reilly Factor on an overhead television and wondering when the nurse will show up to change my diapers. It's depressing as hell.

So depressing, in fact, that the only way I can think of to cheer myself up is to publish some pictures of dogs that have recently been in my cab. And here they are... 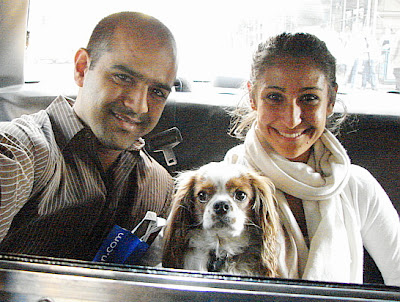 Pictured here is Pippen, a three year-old King Charles Cavalier Spaniel who was named after a character is Lord of the Rings. According to his owners (whose names I didn't get) Pippen is a big eater and can "almost talk". 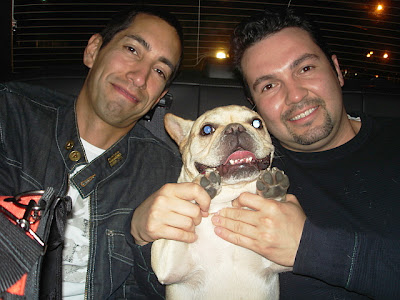 And this is Phoebe, a four year-old French bulldog, with owners Ruben and Eric. Phoebe barks when she sees an animal on tv; she fetches like crazy; and if someone is being loud or is upset, she will actually climb up on that person and put her paw on his or her mouth or chest.

There you go, it worked... I'm cheered up already!

And you can cheer up, too, by clicking here for Pictures From A Taxi.

I must admit to not getting the breast thing as well ... but I imagine it's for a completely different reason. ;o) But honestly, sometimes you just don't wanna put up with it.

I've never understood why people think they need to do what they do in cabs, I think it's a safety factor. I think that ppl figure no matter what dumb ass thing they do in a cab they are still safe with the driver.

I mean, how many times do you hear of a cabbie doing something mean if someone does that? I'm talking rape, murder; that kinda thing.

Everyone talks about how bad of ppl we are, low on the human totem pole and all that. But given the sheer amount of us the ratio of bad/good is pretty damned good.

Hey never mind as you say it comes to us all. I hit the big 50 a while back I realise now, that as you point out things change perspective sometime for the better and sometimes for the worst.

Perhaps it is the first strike to demand respect.
After all the media and the TLC have walked all over taxi drivers for years.
Since I have started throwing dickheads out of my taxi, instead of saying "yes sir ,no sir".

Now my blood pressure is lower and my cholesterol is way down.

Stick up for yourselves.

I passed 50, just don't remember how far back it was!?!? At least ya can remember it happenin':)

The dogs are adoreable but the sex....well, that's quite another thing and on your backseat too!!! Wow, they are bold over there in New York!

I'm well, thanks for asking. I trust you are too?